On Monday 15 June 2015, Senior Course (SC) 126 embarked on their third and final Field Study. Boarding an aircraft, the group left from Rome bound for Tbilisi in Georgia, crossing the Black Sea. As the aircraft went 'feet-dry', the dramatic, spectacular and beautiful scenery of Georgia unfolded. 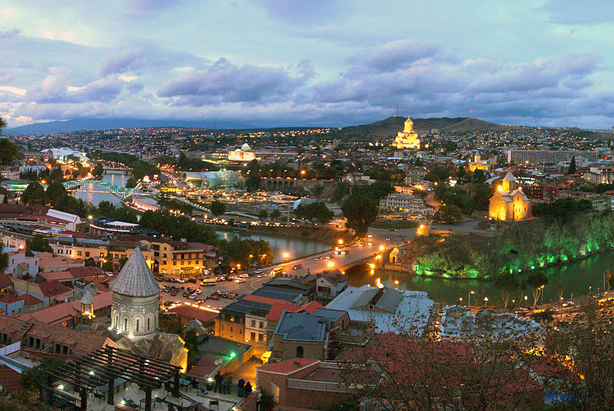 Departing the airport, immediately apparent was a stark contrast between the 'old and new' since independence, with much regeneration and construction in evidence. Two days before, a flash flood had caused considerable damage to parts of the capital, with the flooding of the zoo being widely reported in the world press and the sad outcomes in terms of human and animal deaths. The NDC extends its sincere sympathies to those affected by this tragedy and is thankful that the SC126 running team remained unaware of the danger.

SC 126 visited the Georgian Ministry of Defence and received briefings on national security policy priorities by the Deputy Minister of Foreign Affairs. Following this opening scene-setter, there followed updates on implementing commitments and processes on the road to gaining NATO and EU membership, the defence reform programme, the regional security context and a presentation by the Head of the NATO Liaison Office in Georgia concerning NATO in the South Caucasus and what the future may hold. Key themes were that Georgia will implement the necessary reforms and restructuring to meet both NATO and EU membership criteria, and that it will invest in defence capabilities to counter a clear and present danger from Russia. As a country with first-hand experience of Russia, before and after independence, this insight carried a significant message. The other area of note is Russian funding of non-governmental organizations (NGOs) operating within Georgia, which is spreading divisive pro-Russian propaganda to undermine Georgia's democratic and self-determination reforms.

Another striking observation was that the Georgian people are not of Russian descent but have their own distinctive ethnic genealogy, with their ideals shaped by a long history of holding a key place on the 'silk road'. This is reflected in their generosity, warmth and friendliness, as well as their welcoming embrace of all legitimate multicultural visitors and residents. SC 126 were the recipients of Georgian generosity and friendship when the Georgian MOD treated Course Members to a cultural evening of excellence, which reinforced a uniquely Georgian cultural experience. The NDC looks forward to a return to Georgia and will be welcoming a Georgian representative on Senior Course 127 as part of the NATO and Georgia partnership programme.

So after an outstanding visit to an aspiring NATO member working on its way to implementing the necessary reforms for security and growth, SC 126 boarded another aeroplane bound for one of NATO's newer members, namely Lithuania. For SC 126, the Field Study thus affords an opportunity for close contact both with a Partner and with an Alliance Member, joined by a common thread and facing common concerns ? namely a recalcitrant Russia, bent on resourcing, renewing, rebuilding and establishing a rhetoric of yesteryear when much of the world has moved on and is enjoying the rewards of more forward-looking policies.