The 44th iteration of the Conference of Commandants of Defence Academies (CoC 2015) took place at the Austrian National Defence Academy, from Monday 29 June to Wednesday 1 July 2015. It was co-chaired by the Commandant of the NATO Defense College Major General Janusz Bojarski (POL) and the Commandant of the Austrian National Defence Academy, Lieutenant General Erich Csitkovits (AUT). Participation included both NATO member nations and our Partners across the Globe, others within the Partnership for Peace (PfP), the Mediterranean Dialogue (MD) and the Istanbul Cooperation Initiative (ICI) frameworks, as well as several international organizations and institutions. 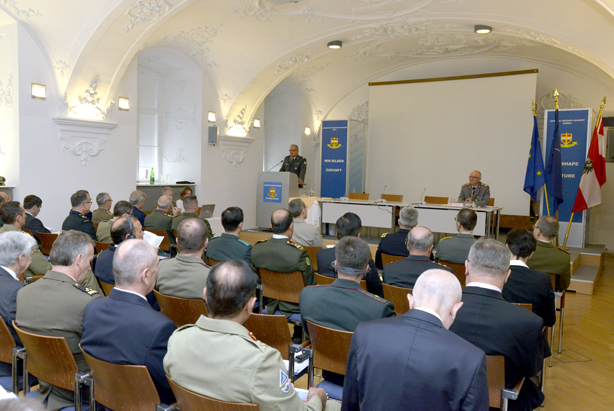 CoC 2015 was attended by commandants and rectors from various national academic institutes and international organizations: the African Conference of Commandants (ACoC); the Inter-American Defense College; the European Security and Defence College/European Union (ESDC/EU); NATO School Oberammergau (NSO); and the PfP Consortium, whose core business is education and security studies.

The Conference extended a particular welcome to nations attending for the first time, namely Colombia, Mauritania and Pakistan, as well as several new national institutions.

The aim of CoC 2015 was to promote continued dialogue between NATO and Partner nations, and discuss how military education can be better applied to enhance intellectual interoperability, taking into account Partner nationsâ feedback regarding their experience of cooperation with NATO and with NATO nations. The agenda thus provided a conceptual link to the educational problems discussed at previous CoCs, with a strong focus on the fundamental importance of partnership.

That said, the main focus of this yearâs NATO Defense College Conference of Commandants was to review actions taken by NATO structures, NATO countriesâ national defence educational institutions and international institutions so as to build effective cooperation with Partner nations in military education, and examine the best ways for education to help Partnership. In this context, intellectual interoperability in professional military education (PME) is of great value.

Against this background, the title of the two-day Conference was âEnhanced Interoperability through Connected Defence Educationâ. The inauguration speech was given by the Commandant of NDC and Co-Chairman of CoC 2015, Major General Bojarski, who introduced the very full programme. The Commandant of the Austrian National Defence Academy, Lieutenant General Erich Csitkovits, welcomed all participants, who then heard a keynote speech from Lieutenant General John W. Nicholson Jr., Commander LANDCOM.

Day One, Tuesday 30 June, featured a number of presentations by various Commandants and a dynamic demonstration of the use of technology in military education and training. A presentation on “The Modernization Process of the Ukrainian Military Education” was given by NATO Adviser for Military Education Reform in Ukraine Prof. B. Pacek (POL). Dr G.Hammond (USA), Provost, USAF Air University, then spoke about “The Challenges and Requirements of Modern PME”, looking at the subject in relation to a blend of tradition and the demands of the 21st century. Closely linked to this theme was the following topic, “Overview of Technology in Education – A Dynamic Demonstration of Smart Device Ability”, by Finmeccanica Industrial Group. There was then an address on “Nordic-Baltic Cooperation in Professional Military Education and Research”, by Dr O. Kværnø, Dean of the Royal Danish Defence College. Afterwards, the Deputy Vice Chancellor of the Swedish National Defence College, BGen B. Axelsson, addressed the subject of “Strategic Leadership Development. A Newly Implemented Programme for Civilian and Military Top-Level Management”. Later in the day, there was a presentation on “Integrated Support and Consequences on Education”, by MGen J. Free, CBE (UK), Commandant of the Joint Services Command and Staff College. The last lecture of the day, “Turkey’s Contribution to Partner Nations in Military Education”, was delivered by LtCol M. Divril of the Turkish Integrated Command & War College.

Results were presented by each TP Chair during the plenary session on the afternoon of Day Two.

The programme for Day Two of the Conference also included three more presentations: âNational Defence Institute Training and Education Programme â a Comprehensive Viewâ, by Prof. I. Nunes, Head of the Research Centre, Portuguese National Defence Institute; âNational Military Educational Systemâ, by Brig P. Gates of the Australian Defence College; and âNational Military Education Systemâ, by MGen R.G. Nieto, Director of the Colombian War College. Each of the lectures was followed by a Question & Answer session.

Worthy of attention is the active contribution to the programme given by non-NATO nations, since this was the principal aim of the 44th CoC. These nations were Austria, Australia, Colombia, Sweden and Switzerland, in addition to which the Defence Education Enhancement Programme (DEEP) should be mentioned.

With next yearâs CoC in perspective, the Acting Commandant-Rector of the Polish National Defence University, Professor Colonel Dariusz Kozerawski, invited CoC 2015 members to Warsaw, Poland, which was very much appreciated by the participants and by the NDC Commandant. Proceedings then concluded with closing remarks by Lieutenant General Csitkovits and Major General Bojarski. Both speakers underlined the great significance of the Conference, with growing numbers of representatives from both NATO member nations and our Partners - 124 participants from 45 countries, representing 71 institutions worldwide.