Visit by the Ambassador of the Republic of Poland to Italy

On Monday 13 July 2015, the NATO Defense College (NDC) was honoured to receive H.E. Tomasz Orłowski, Ambassador of the Republic of Poland to Italy. He was accompanied by a delegation composed of Col Andrzej Sarna, Military Attaché, and Ms Agata Błaszczyk, Counsellor. 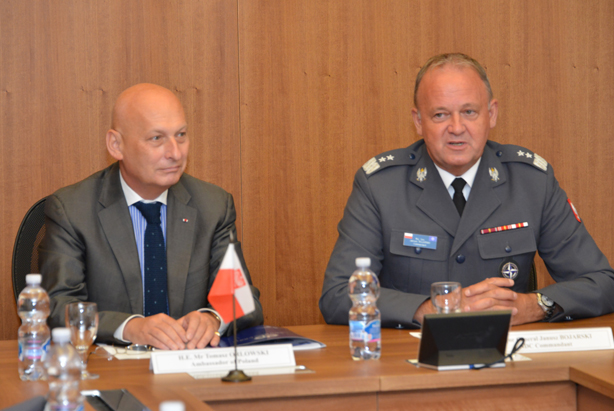 The aim of the visit was to have a general overview of the College’s objectives and details of its academic and curricular activities, with a special focus on the recent ‘NATO and New Ways of Warfare: Defeating Hybrid Threats’ Conference and its outcomes.

Upon arrival, the visitors were warmly welcomed by the NDC Commandant Major General Janusz Bojarski and Dean Dr Daria Daniels Skodnik. They then spent time in discussion with MGen Bojarski.

The delegation was then briefed by the Military Assistant to the Commandant, Col K. Marselis (NLD F), who presented the fundamentals of the NDCâs mission and the main features of College courses. After the briefing the group participated in a stimulating round table discussion with the Commandant, Dean and Faculty Advisor and Senior National Representative of Poland at the College, Col A. Ostrowski (POL A).

Tomasz Orłowski is a previous Under-Secretary of State at the Polish Ministry of Foreign Affairs, responsible for development cooperation, the Polish diaspora and Oriental and Asian policy. From 2007 to 2014, he was Ambassador Extraordinary and Plenipotentiary to France and the Principality of Monaco. Before that, from 2005 to 2007, he served as Deputy Director and later as Director of the Office of Protocol. Tomasz Orłowski was appointed Ambassador in 2005. From 2004 to 2005 he was Deputy Director of the Department of the United Nations System and Global Problems. From 2001 to 2004 he served as Secretary General of the Polish National Commission for UNESCO.