On 17th July 2015, the NATO Defense College had the pleasure of welcoming Major General Andrzej Fałkowski, Polish Military Representative to NATO MC and the EUMC. 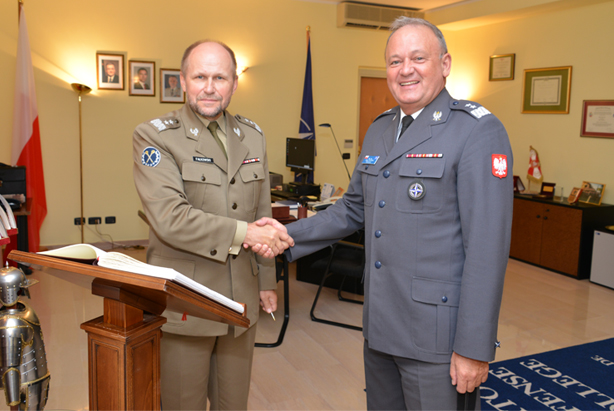 MajGen Fałkowski then received an update on College activities during his office call with the Commandant, before moving to the Main Auditorium to hear the presentation of a study project from members of Senior Course 126.

Later, MajGen Fałkowski delivered a Lecture of Opportunity to SC 126 on the challenges posed by NATO’s consensus-based decision-making process. This thought provoking lecture was followed by a lively Q&A session.

The visit afforded an excellent opportunity for a member of the NATO and EU Military Committees to get a better insight into NDC activities.

Andrzej Fałkowski, Major General, Polish MOD, earned his B.A. from the Military Academy of Logistics in Poznań (1982), his M.A. from the University of Gdańsk (1985), and Ph.D. from the University of Łódź (1997). He also completed postgraduate studies in Military Economics at the Economics Faculty of the Military Academy of Politics (1988). MajGen Fałkowski was assigned as Defence, Military, Naval and Air Attaché of Poland to the US in Washington D.C. (2011-2013). He, then, served as Deputy Chief of General Staff of the Polish Armed Forces. Since June 2014, he has been the Polish Military Representative to the NATO and EU Military Committees.