On 24th July 2015, the NATO Defense College (NDC) celebrated the graduation ceremony of Senior Course 126 (SC 126). With 71 high-ranking participants from 28 different countries graduating, this major event was attended by Course Membersâ families as well as the College Flag Officers, Faculty and Staff. 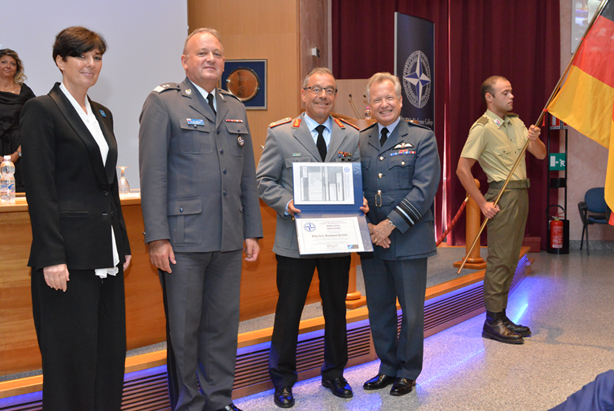 Nations represented on SC 126 include seventeen NATO Member States, four countries from the Partnership for Peace, three from the Mediterranean Dialogue and one from the Istanbul Cooperation Initiative, as well as three Global Partners.

The guest of honour was Air Marshal Sir Christopher Harper, the Director General of NATO International Military Staff, whose participation on occasions like this is always a source of inspiration for Course Members as they look ahead beyond their graduation. During his career, Air Marshal Sir Christopher Harper held significant appointments such as Command Group Executive Officer at NATO's Headquarters Allied Air Forces Central Europe and Deputy Commander of NATOâs Allied Joint Force Command at Brunssum in the Netherlands; he was also involved in operations over Iraq and Bosnia.

Distinguished guests arriving at the College at the start of the day were warmly welcomed by the NDC Commandant, MajGen Janusz Bojarski (POL F), and the Dean, Dr Daria Daniels Skodnik (SVN C). Various Ambassadors and Military AttachÃ©s, together with Italian civilian and military authorities, honoured the occasion with their presence.

The Commandant congratulated the Course Members on having successfully completed five months of intensive and demanding study, including a very full Field Study programme. He underlined the relevance of the insights acquired in discussing regional and world issues with authoritative speakers from both the academic and professional spheres, this plurality of viewpoints being an essential feature of Senior Courses. In this respect, among the most memorable lectures and presentations during the current Senior Course were those by NATO Secretary General Jens Stoltenberg; the guest speaker for the inauguration of Senior Course 126 H.E. Ambassador Douglas Lute, US Permanent Representative to NATO; and Gen (ret.) John Allen, Special Presidential Envoy for the Global Coalition to Counter ISIL, on âThe importance of strategic leadershipâ.

In addition, SC 126 had the opportunity to attend one of the most important events hosted by the NDC, the international conference entitled âNATO and New Ways of Warfare: Defeating Hybrid Threatsâ

In his graduation address, Air Marshal Harper highlighted the two main challenges currently facing the Alliance: the threat from the Islamic State of Iraq and the Levant (ISIL) and confronting Russiaâs ârealpolitikâ. Sir Christopher also emphasized the importance of socializing, networking and keeping in touch for Senior Course alumni.

A short video, produced by the NDC Public Affairs Office and outlining some of the key moments in Course Membersâ stay at the College, was then presented.

The centrepiece of the graduation ceremony, and in a sense the culmination of the entire Course, came when Course Members were called forward individually to stand by their respective national flags and receive their diplomas for successfully completing the Course.

As Course Members received the personal congratulations of Air Marshal Harper, the Commandant, the Dean and the Flag Officers of the College, this fitting conclusion to the Course was warmly accompanied by the applause of family members.

With SC 126 now ready to bid farewell to the College, SC 127 is scheduled to commence on 31st August.