On 16 September 2015, the NATO Defense College had the pleasure of welcoming Ambassador Marriët Schuurman, the NATO Secretary Generalâs Special Representative for Women, Peace and Security. 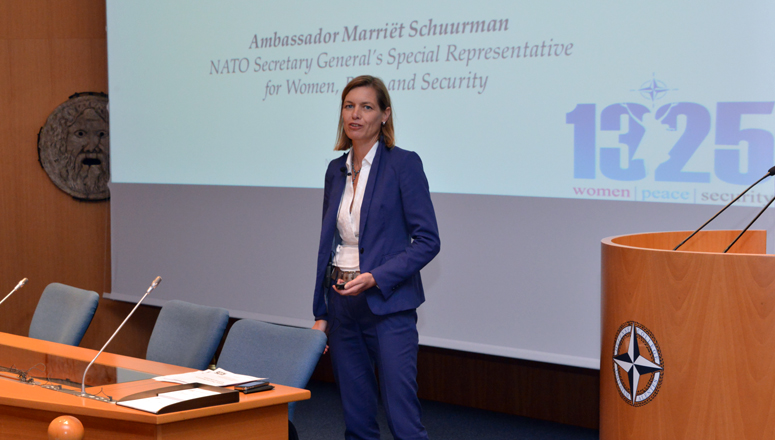 Upon arrival, Ambassador Schuurman was welcomed by NDC Commandant MajGen Janusz Bojarski (POL F) and the Dean Dr Daria Daniels Skodnik (SVN C). The Ambassador then received an update on College activities during her office call with the Commandant, before attending a lecture in the Maynard-Thorn Auditorium on âThe significance of Economics for Security and Stabilityâ by NATOâs former Senior Defence Economist Adrian Kendry.

During her visit, Ambassador Schuurman delivered a lecture entitled âWomen, Peace and Security in NATO-led Operationsâ. The lecture, addressed to Senior Course 127, NDC authorities, Faculty and Staff, was followed by a question and answer session. Dr Daniels Skodnik introduced the speaker and offered concluding remarks.

The Ambassadorâs visit was a unique opportunity for the NDC to be apprised of recent developments in gender equality.

Gender inequality remains one of the most prevalent forms of human rights violations today. Decades of effort and awareness-raising have only been partially successful in eradicating the gap between men and women, and boys and girls across the globe. Amongst the most severe restrictions that continue to shackle women in different regions are forced marriage, the lack of mobility, restricted ownership of land, limited access to education, clothing requirements, sexual subjugation and female infanticide. These issues tend to be more critical in regions such as East Asia, the Middle East as well as Sub-Saharan and Central Africa. Nevertheless, even the most developed countries which are perceived as being the most advanced in gender equality issues still experience difficulties in closing the gap.

The workplace and the home are the main areas where women are discriminated against. Women tend to be disadvantaged in terms of salary and career development. For instance, women in the EU earn on average 16% less than their male counterparts according to a report published in 20141. Moreover, in countries like Portugal and Hungary the gender pay gap is not only high (over 20%) but it is increasing. In addition, on both sides of the Atlantic women are often expected to juggle tasks between the workplace and the home.

One of the recent campaigns attempting to tackle the issue of gender inequality is the âHeForSheâ solidarity movement launched by UN Women. The initiative is supported by NATO authorities, who have endorsed the campaign in order to demonstrate the Allianceâs strong commitment to eradicating inequality. Instead of focusing solely on womenâs efforts to address the issue, the âHeForSheâ campaign broadens the narrative to encourage men to take a stand as well. The âHeForSheâ campaign strives to encourage men and boys to be stakeholders and advocates, taking action and raising their voice in support of gender equality.

The NATO Defense College is fully aware of the challenges posed by gender inequality. It is committed to taking proactive steps in order to raise awareness and alleviate the problem. Vox Collegii, the magazine of the NDC has repeatedly featured a special section on âNATO & Genderâ over the past two years. Likewise, the NDCâs commitment to recruiting and retaining a diverse and talented workforce is highlighted by the fact that the number two position â Dean - is currently held by Dr Daria Daniels Skodnik â the first woman Dean in the Collegeâs near 65-year history.

2.Turkey recognizes the Republic of Macedonia with its constitutional name.

1
PrevNext
Back To Top