The European Perspectives Field Study continued for Senior Course 127, with a visit to the UK Ministry of Defence. Air Chief Marshal Sir Stuart Peach, Vice Chief of Defence Staff, welcomed the delegation to the United Kingdom. He opened the day by addressing the attendees regarding the importance of the NATO alliance. He spoke of the future of the alliance, and the need for NATO to be adaptable and ready to operate in a changing environment. He took valuable time to engage with Course Members, answering questions with informative detail. He concluded his remarks by offering thoughts to Course Members about education and training, encouraging Course Members to take full advantage of the tremendous learning opportunity that the NATO Defense College provides. 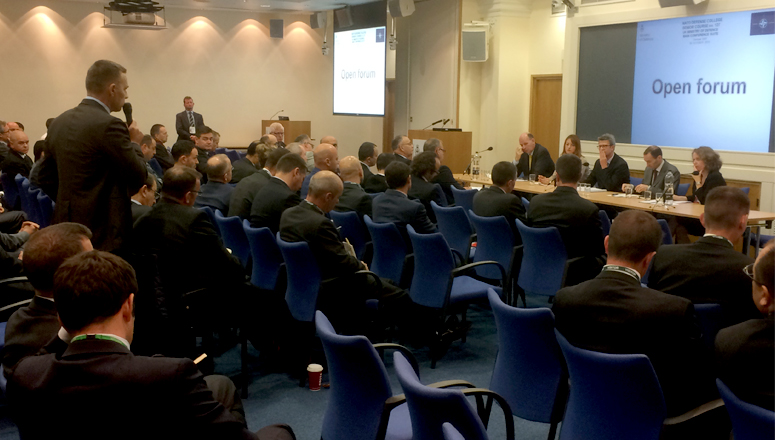 The Director International Security Policy, Nick Gurr, followed the Vice Chief and offered insights into the United Kingdom's global outlook and defense and security priorities. He discussed current challenges and added to the Vice Chief's comments highlighting the requirement for NATO to continue to adapt politically and militarily. Mr Gurr reinforced the deep UK commitment to the NATO alliance and outlined UK priorities leading up to the Warsaw Summit.

The presentations continued with a line-up of speakers from the British Ministry of Defence, the Foreign and Commonwealth Office and the Department for Internal Development. The speakers provided detailed and informative presentations on the UK approach to defense and security in the current strategic environment. They outlined the framework used within the UK to develop the Strategic Defense and Security Review (SDSR), and demonstrated a linkage to the four pillars of the UK National Security Objectives. The speakers displayed a "whole of government" approach by linking diplomacy and defense, while explaining how they work hand in hand when developing a national defense and security strategy. Various times throughout the discussions, the presenters referenced the 2010 SDSR that describes NATO as the "bedrock" of UK defense, and offered that NATO is at the center of the current Review. Consistent with previous visits, Course Members contributed to the exchange by offering challenging questions to each of the presenters.

Following the discussions at the Ministry of Defense, the delegation walked to the Palace of Westminster for the unique opportunity to meet with members of the British House of Commons. Course Members spent over an hour with the Chairman of the House of Commons Defense Select Committee, the Rt Honourable Dr Julian Lewis. Two other members of the committee, the Rt Honourable John Spellar and retired British Army Colonel Bob Stewart, joined Dr Lewis for the discussion. The Members of Parliament provided insight into the roles and functions of the Select Committee, as well as other important topics pertaining to the current security environment. Following the meeting, Mr Stewart led the delegation on an impromptu tour of the Palace, including the chambers of both Houses of Parliament and the Royal Gallery