The NDC hosts the 62nd Annual Anciens' Conference and Seminar

On Thursday 15th and Friday 16th October, the 62nd Anciensâ Annual Conference and Seminar was held at the College. 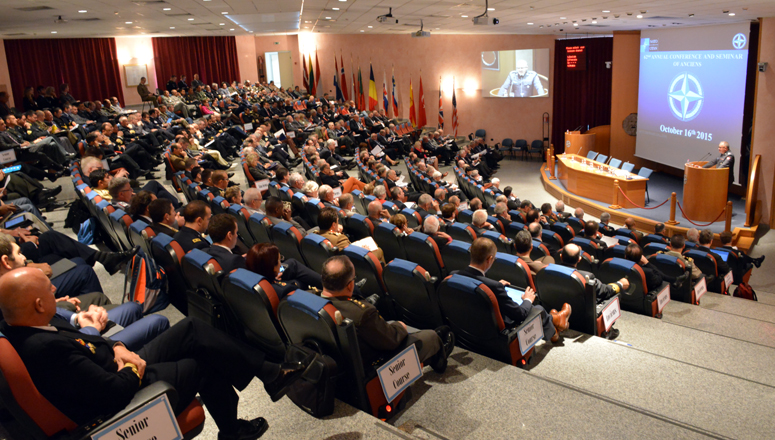 The first Anciensâ Seminar and Conference was organized in Paris, at the Supreme Headquarters in Roquencourt, on 18th June 1954. Membership of the Anciensâ Association has continued to grow and meetings have become an increasingly important annual event. Hosted every year at the NDC, the Seminar and Conference brings together former Course Members, enabling them to renew friendships made while serving at the NDC and updating them on current issues of concern to NATO. In this way, the Anciens form an influential and informed body of opinion supporting the Allianceâs values.

The theme of this yearâs seminar was âHybrid Conflict on NATOâs Flanksâ. On the evening of Thursday 15th October, a non-hosted reception for the returning Anciens was held at the Italian Army Officersâ Club in Castro Pretorio.

The following morning, the Secretaries of National Anciensâ Associations gathered at the NDC for their annual Anciensâ Executive Committee meeting, chaired by NDC Dean Dr Daria Daniels Skodnik (SVN C). After the meeting, the Seminar took place in the Maynard-Thorn Auditorium. The current Senior Course and NATO Regional Cooperation Course also attended. Participants were welcomed by Major General Janusz Bojarski (POL F), Commandant of the NDC and current President of the Anciensâ Association. He highlighted the value of this annual meeting and also underlined the key message that, in light of current events, new ways of thinking are required from military and political leaders in order to address unprecedented new security challenges.

The keynote speech was offered by General (ret) Knud Bartels (DNK), former Chairman of the NATO Military Committee. In view of his many services to the NATO Defense College, and in accordance with the wishes of the Anciensâ Association, General Bartels was on this occasion inducted as an Honorary Ancien by the Commandant of the NDC. General Bartels then delivered a memorable address, emphasizing the importance of contextualizing hybrid warfare in relation to the broad concept of warfare in its traditional, Clauswitzian sense. He reminded the audience that strategic dialogue and the rebuilding of economic, political and strategic relationships are vital for future dealings with Russia and Iran. With regard to Russia, he said that âthe future belongs to them as well as to us. They are where they are and they are our neighbours. We can choose to ignore the realities, or we can choose to address them.â In his conclusion, General Bartels noted that strategic patience is today, more than ever, a necessity.

Following the plenary discussion, three invited panellists offered their perspectives on the theme of the conference. In a panel chaired by international journalist Nik Gowing (GBR C), the first speaker was Timo Koster (NLD C), Director of Defence Policy and Capabilities at NATO. He was followed by Ambassador (ret.) Steven Pifer (USA C), current Senior Fellow at the Brookings Institute and Director of the Brookings Arms Control and Non-Proliferation Initiative. The last panelist to take the floor was Dr Can Kasapoglu (TUR C), the current NDC Eisenhower Fellow.

In the afternoon, the Anciensâ Annual General Meeting was held in the Auditorium.

The Conference and Seminar afforded an important opportunity to forge new ties between the Anciens and the current NDC community, and to involve all concerned in an in-depth analysis of current prospects and priorities for the Alliance.