On 30th October 2015 the NATO Defense College had the pleasure of welcoming Mr Roderich Kiesewetter, a Member of the German Parliament. He delivered the traditional Eisenhower Lecture to Senior Course 127 and NATO Regional Cooperation Course 14. 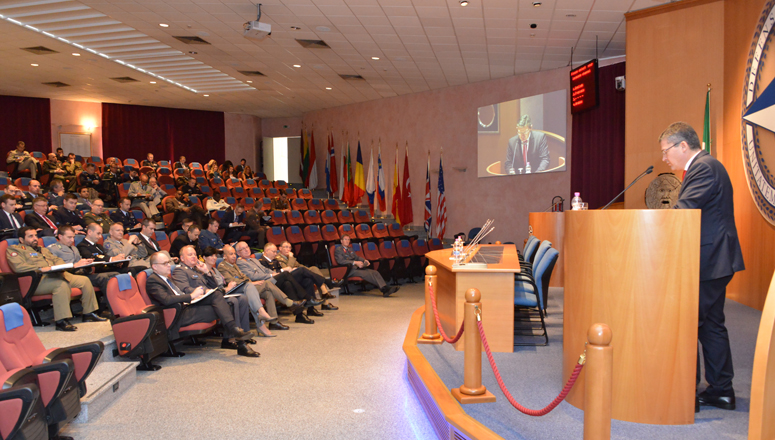 The Eisenhower Lecture is traditionally delivered twice a year, as part of the Senior Course. Named after the founder of the NDC, General Dwight D. Eisenhower, it is one of the most important lectures at the College and has a long tradition. It is always given by a top-level speaker who provides the audience with in-depth, first-hand knowledge of the topic under discussion.

Mr Kiesewetterâs lecture, entitled âGerman Security and Defence Policy in NATO and the European Unionâ, addressed core international security challenges of today as viewed from the German perspective. He identified several issues of concern to NATO, the EU and Germany, including the decline of the West and challenges to the credibility of international actors such as the United Nations, the World Bank or the International Monetary Fund, who have traditionally acted as providers of norms for the global community. The changing balance of power in the world also leads to new tensions between the great powers and, although a direct clash is unlikely, challenges of various kinds are associated with such a scenario: fragile states, migration, climate change, poverty and an increase in economic warfare are amongst the issues that need to be carefully addressed by the Atlantic community. Mr Kiesewetter concluded by stressing Germanyâs interest in enhanced multilateral cooperation with its partners. In light of the many multidimensional challenges of today, coupled with the decline in military spending and the rise of new actors, nations like Germany are increasingly dependent on multilateralism and cooperation.

The lecture was followed by an insightful Q&A session, which gave Course Members an opportunity to engage with the lecturer and exchange views on the topic of German security and defence policy in the context of NATO and the European Union.

Mr Roderich Kiesewetter currently serves as a Member of the German Parliament for the Christian Democratic Union party (Christlich Demokratische Union Deutschlands, or CDU). Born in 1963 in Pfullendorf, Mr Kiesewetter studied economics in Munich and then in Austin, Texas. He completed general staff officersâ training at the Bundeswehr Command and Staff College. During his military career, he was involved in various command and staff positions in the EU Council, NATO HQ in Brussels, and the German Federal Ministry of Defence; in 2006 he was appointed Head of the Chief of Staffâs office at SHAPE. He was elected to the 17th German Bundestag in 2009. Until 2013 he served as Deputy Chairman of the Subcommittee on Disarmament, Arms Control and Non-Proliferation. He is currently Chairman of the Parliamentary Assembly â Union for the Mediterranean (PA-UfM). He is also Head of the German delegation to the Euro-Mediterranean Parliamentary Assembly (EMPA) and Deputy President of the German Armed Forces Reservistsâ Association.