On the afternoon of 4 November, SC 127 visited the Belgian Defence Staff, where presentations were given on Belgium's national priorities. LtGen Buchsenschmidt, ACOS Strategy, referred in his welcoming address to the New Strategic Plan which has been delayed, but should be finalized before the end of the year and coordinated with NATO. He also underlined the need for NATO and the EU to balance their roles. 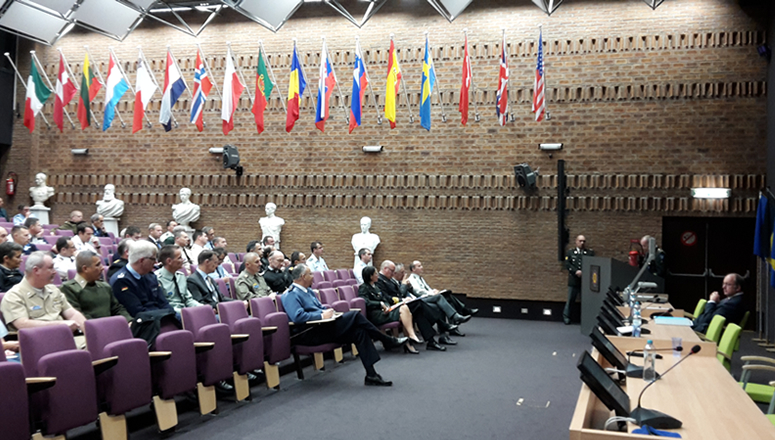 Ambassador Paul Huynen thereafter gave an overview of Belgium's Foreign Security Policy, seen in a historical context. He commented that the main security challenges have increased in number over the last year, domestic challenges being the main reason. The following speaker was Maj Lut Ruys (Strat), whose topic was "Belgium's Defence Policy": the focus was not only on being a reliable partner within NATO, but also on the Belgian aim to strengthen the ESDP at the same time as advocating strong EU-NATO relations. Cdr Hans Huygens (ACOS Strat) then presented "Multinational Cooperation from a Belgian Perspective", explaining in which forms this cooperation takes place, with special emphasis on Belgian-Dutch naval cooperation.

In the evening the Belgian Chief of Defence, Gen Gerard Van Caelenberge, together with the Chairman of NATO's Military Committee, Gen Petr Pavel (in absentia), hosted a superb reception for SC 127 at the beautiful Chateau de Val Duchesse. The senior leadership of the Belgian Defence Forces and flag officers from Allied nations, as well as representatives of NATO's International Staff and International Military Staff, were present, giving Course Members a unique possibility of engaging with them in an informal setting.