On 5 November, SC 127 left Brussels by bus and was escorted by "Red Devils" on motorbikes, performing their job as elegantly as ballet dancers to ensure that the group would be punctual for its flight from Paris to Montreal, Canada. On arrival in Montreal, the group was greeted by new buses ready for the two-hour drive to Ottawa. 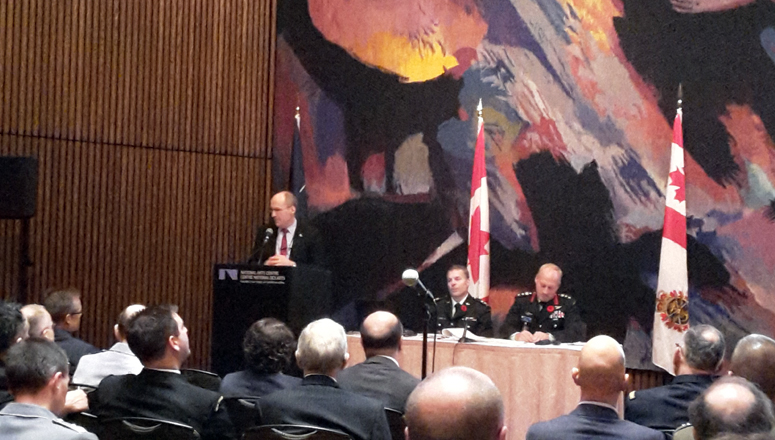 0n 6 November, SC 127 was back in business with a visit to the National Arts Centre in Ottawa, where the briefings on Canadian Policy were held. The first was given by Mr Gordon Venner, Assistant Deputy Minister (Policy) from the MFA, on "The Canadian Strategic Setting: Canada in the International and Security Environment". He started by reminding the course that Canada's new government was merely 48 hours old, and that it was therefore difficult to give a detailed forecast of how its international policy would develop. But he did point out that the new government had signalled its intention of presenting a new White Book on Defence, with the aim of producing it within six months. He went on to paint a picture of Canada's strategic setting by underlining the importance of the country's geographical position, as both an Atlantic and a Pacific nation but also as an integral part of the Americas. At the same time he stressed that Europe remained critically important for Canada, and that NATO would remain the cornerstone of Canadian defence policy. The key priorities for the Canadian Defence Forces are the defence of the country, to provide services such as search and rescue (SAR) for the inhabitants, and to maintain the unique relationship with the USA. The following speaker was Ms Isabelle Desmartis, Director General, Policy Planning, who spoke about "Defence Policy, the Arctic and Emerging Domains". She pointed out that the new government's platform aimed at keeping the current defence spending level, focussing on national and continental defence as well as contributing to international peace and security. She drew Course Members' attention to the fact that climate change was opening a role for the military in the Arctic, not only with regard to SAR but also in the exercise of sovereignty and control. Increased Russian activity in the area is also an element in this equation. As a consequence, Canada has also strengthened its presence in the Arctic by increasing the number of Rangers deployed. LtGen Mike Hood, Chief of Staff of the Air Force, underlined in his talk that NATO remained the main source of stability for Canada. Based on the strategic environment, there was a need for flexible and interoperable forces, especially with close allies such as the USA. "Canada first" is, naturally, the main defence strategy of the nation.

After a lunch hosted by LtGen Guy Thibault, Vice Chief of Defence Staff, BG Peter Dawe, Director General Operations, gave an overview of "Canadian Forces Missions and Priorities". Mr David Drake, Director General, International Security and Intelligence Bureau, then went through the current threats and trends facing Canada. He underlined that radicalized nationals who trained and fought abroad had led to the former division between domestic and international security interests having disappeared. The next speaker was RADM Darren Hawco, who took capability planning as the starting point for an account of "Canadian Force Development". Concluding remarks were made by Ms Raquel Garbers, Deputy Director General of International Security Policy, who underlined the relevance of Canada's geography as a fundamental reason for the expeditionary nature of its defence forces. Finally MG Valentin, Head of the NDC delegation, expressed his gratitude to the Canadian hosts for their gracious hospitality and an excellent programme so soon after the change of government.