SC 127 does not sleep in on Sunday mornings. Instead, on 8 November we headed early to the Canadian Airforce Airbus that graciously flew us to Norfolk, VA. The next morning we arrived at NATO's only headquarters on American soil and the second of its Strategic Commands, Allied Command Transformation (ACT), with the logo "Leading NATO's Military Transition". The most important news of the day was that SC 127's LtCol Shabeeb Mohammed Al Noaimi had just been promoted to full Colonel. He was proudly congratulated by RAdm Peter Gumataotao, Deputy Chief of Staff (DCOS) Strategic Plans and Policy (SPP), and the whole Senior Course. This set the scene for the start of a fruitful day. 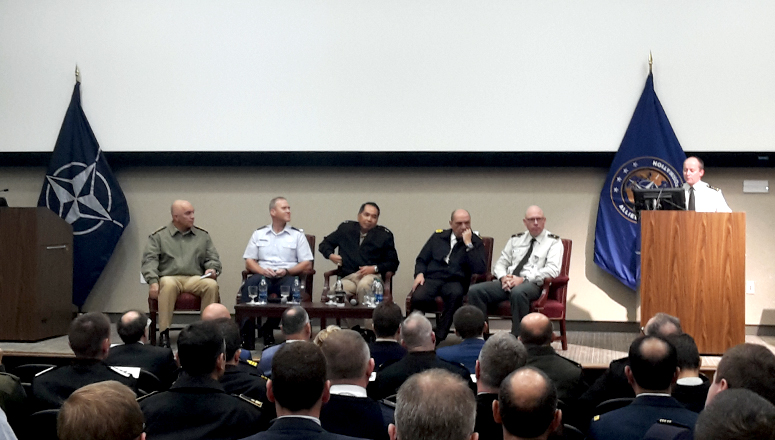 After welcoming remarks by RAdm Gumataotao, Col Koen Declercq spoke on the subject of "ACT's work leading to Warsaw". He explained that ACT had set up a working group to that effect. ACT would first consider what had been implemented in relation to the decisions taken at the last summit, and would then prepare unconstrained military advice on what should be done at the next summit. He pointed out that the assumptions of the post-Cold War period no longer applied. It was necessary to consider whether NATO's current military posture was still valid. NATO needed to have one single posture, and the associated capacity to deal with all emerging challenges. VAdm Javier Gonzalesz-Huix, DCOS Joint Force Trainer, embarked on "Exercises and Training" by underlining that, based on the changed strategic environment, exercises had now become an especially useful tool to increase the Alliance's readiness and interoperability, as well as providing an important assurance measure. The focus is on finding the right balance in the exercise programme, between Article 5 and no-Article 5 crisis response operations. Increased focus on complex warfare and more live exercises are now the rule of the day: from 2012 to 2015, the count for NATO and national exercises increased from 90 to 99 and 11 to 196 respectively. However, the need for sufficient resources remains a challenge. Cdr Chris Godwin, working for the DCOS SPP, then spoke about "NATO's Role in countering Hybrid Warfare". He pointed out that hybrid warfare could be interpreted in many ways, but he drew the conclusion that a hybrid threat was based on a blend of ambiguous and direct coercive means. NATO needs a broad and targeted deterrence strategy, but nations are the first responders. This intervention was followed by a high-profile Q&A panel, with RAdm Gumataotao, VAdm Gonzalesz-Huix, LtGen Jeffrey Lofgren (DCOS Capability Planning), RAdm Zeki Ugurlu (ACOS Command, Control, Deployability and Sustainability) and BG Xavier Watteeuw (ACOS Defence Planning). One of the priorities the panel discussed was the challenge of adapting as quickly as the security situation evolves: ACT's job is not to predict the future, but to show trends. The speakers further underlined the relevance of the large live NATO exercise scheduled to take place in Norway in 2018: Finland and Sweden will not only be participating, but are also involved in the planning process. The visit finished with lunch in the staff mess, where some NDC Anciens and national representatives joined the College delegation.