On 12 November, SC 127 woke up in the Big Apple. Unfortunately, the United Nations was unable to accommodate the Course in-house for briefings and questions, but the German House kindly opened its doors for the group and the UN speakers. 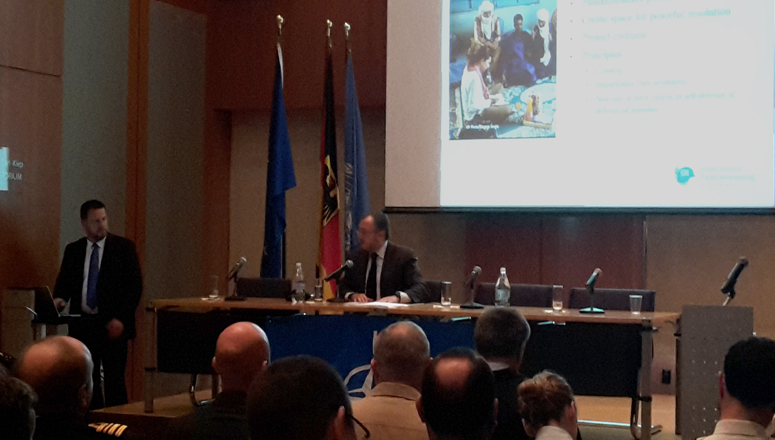 Welcoming remarks were given by Col Andreas Stoebe, German Military Adviser to the UN, and Col Kim Bruno Petersen, NATO Liaison Officer to the UN. Mr Walid Musa Abdelkarim, Director Somalia Desk/DPKO, briefed the group on âThe UN in Somaliaâ. He pointed out that Somalia was regaining geopolitical importance and now received most of its military assistance from the African Union (AU). A major problem is the involvement of so many international actors in Somalia, leading to fragmentation of the effort. Considerable progress has nevertheless been made in Somalia, especially in relation to governance. However, Al Shababâs rapidity of action and effective âmedia machineâ still create difficulties. The speaker underlined that a great deal had been achieved in NATO-AU cooperation, but that there was room for improvement. Since most operations are now in Africa, reinforcement of such cooperation is especially important.

Jack Christofidis, Director Policy Evaluation and Training Division/DPKO DFS, then spoke about âEvolution of Peace Operations and the Way aheadâ. He started by underling that the UN now has to deal with armed groups not interested in seeking a peaceful resolution to conflicts. Today the UN has 125 000 peacekeepers, the highest figure ever. The budget for peacekeeping is now over $9 billion â a phenomenal increase since 2007, in fact almost double. The speaker also commented that fatalities had not risen in line with the number of peacekeepers. The cooperation with NATO in settings such as Mali is no doubt instrumental in improving the quality of peacekeeping, the mandate of these operations having become far more complex: many of them now comprise fully integrated development, humanitarian and peacekeeping pillars.

As a final theme, MajGen Adrian Foster, Deputy Military Adviser to UN, spoke about âThe Role of the Office of Military Affairs and Peacekeeping Operationsâ. He pointed out that UN peacekeeping achieved a great deal. The objective is to protect civilians, which sets it apart from mainstream military operations. UN member states have sought to appraise policy for peacekeeping operations. A number of high-level panels, convened in recent months, have offered the following recommendations: 1) greater emphasis on conflict prevention; 2) enhanced cooperation with regional organizations such as NATO, the EU, the AU, the CSTO and the OSCE; 3) a comprehensive change to planning and the conduct of operations, particularly in terms of responsiveness. To this end, a Strategic Force Generation Cell has recently been established at the UN, to improve mobility, intelligence and performance.

The briefings were followed by a Q&A session, in which the speakers were joined by Capt (N) HervÃ© Aufret.

This session, the last of SC 127's Transatlantic Link Field Study, marked the conclusion of two stimulating weeks. Before leaving New York, Course Members had the opportunity to visit the 9/11 Memorial.