War at the gates: Containing the conflicts of the Mediterranean

On Thursday 19 November 2015, NATO Regional Cooperation Course-14, led by NDC Middle East Faculty Director Col Giuseppe Morabito, participated in a conference entitled âWar at the Gatesâ held at Palazzo Montecitorio - the Italian Parliament. The conference, which brought together distinguished guests and participants, was opened by Dr Tiberio GRAZIANI and Stefano DAMBRUOSO, MP and Commissioner of the Italian House of Representatives. 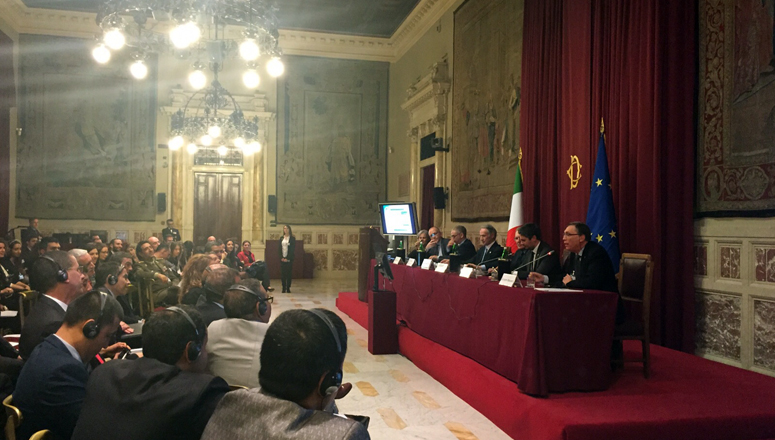 The first panel dealt with the âLibyan and Syrian civil wars and the threat of destabilization in North Africa and the Near Eastâ. The programme included lectures by a number of prominent speakers: Admiral Mario Rino ME (ITA N), Dr Azzurra MERINGOLO (IAI, International Affairs Institute), H.E. Ambassador Claudio PACIFICO (CSD) and Biancamaria SCARCIA AMORETTI, Professor of Islamic Studies at the University of Rome âLa Sapienzaâ. The ensuing discussion was moderated by Gabriella LEPRE, a journalist at RAI (Italian broadcasting company), and looked at how to prevent destabilization from Libya and Syria from affecting the whole region.

âISIS and AL Qaeda: the threat of international terrorism in Europeâ was the topic of the second panel. A number of distinguished speakers attended the conference, including Stefano DAMBRUOSO, General Goffredo MENCAGLI (Carabinieri), Sen Marco MINNITI, Dr Vittorfranco PISANO (Head of Department at the International University of Social Sciences, UNINTESS) and Prof Ranieri RAZZANTE (Director of Observatory on Money Laundering and Terrorism Financing, ORFT at the B.Visentini Foundation of the Luiss University of Rome). All panels were followed by interesting Q&A sessions. One of the priorities discussed was the importance of cultural values as a good starting point to face the threat of terrorism.

In his concluding remarks, Col Morabito expressed the NDCâs appreciation at being invited to participate in such an interesting conference at such a critical time and underlined the relevance of cooperation with Alliance partner countries from the Mediterranean region.