On 27th and 28th January 2016, the NATO Defense College had the pleasure of a visit from Vice-Admiral Robert A. Davidson, Military Representative of Canada to the NATO Military Committee. 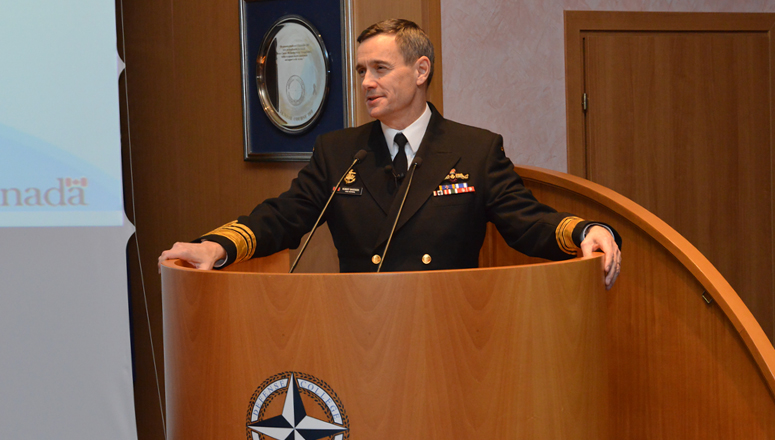 Upon his arrival, VAdm Davidson was welcomed by the NDC Commandant, Maj Gen Janusz Bojarski (POL F), Dean Dr Daria Daniels Skodnik (SVN C) and the NDC leadership. During his visit to the NDC the Admiral was escorted by the Canadian Senior National Representative, Colonel Ian Hope (CAN A).

VAdm Davidson received an update on College activities from the Commandant and Dean, before moving to the Maynard-Thorn Hall to hear Study Project (SP) presentations by three Senior Course 127 Committees. This was followed by a tour of the premises.

During his lecture, VAdm Davidson focused on the role of NATO in maintaining and improving global security. He also provided important recommendations for the future of the Alliance, based on his extensive military experience.

Vice-Admiral Robert A. Davidson joined the Canadian Forces in 1977, in the Naval Reserve. He was selected for naval officer training in 1978, and subsequently served in various ships and establishments on the east and west coasts. He later transferred to the Regular Force in order to specialize in submarines. Vice-Admiral Davidson deployed with HMC ships Iroquois, Calgary and Protecteur from April to October 2008 to participate in Operation Altair, Canada's maritime contribution to Operation Enduring Freedom. This deployment included a period in command of Combined Task Force 150, responsible for coalition maritime security operations in the region spanning from the Gulf of Oman through the Arabian Sea to the Horn of Africa and into the Red Sea. In July 2012, Vice-Admiral Davidson was appointed to serve as the Canadian Military Representative to NATO in Brussels, Belgium.