The NATO Defense College celebrated the graduation of its Senior Course 127 (SC 127) in a ceremony held on 5 February 2016. The graduation marked the end of the 5-months long course for the group of 76 high-ranking military and civilian participants, representing 31 countries from across the Atlantic Alliance and partners. 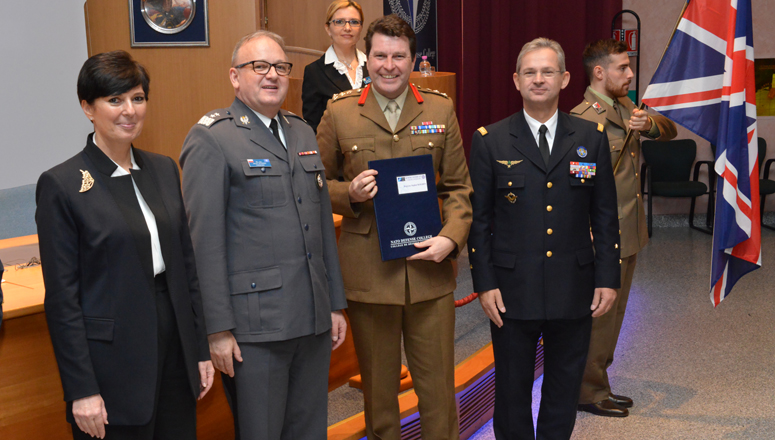 The Senior Course is the NDCâs main academic activity. It runs twice a year and encompasses several study periods, as well as three field studies to NATO and partner countries. Senior Course 127 came to an end at the beginning of an especially important year for the College â 2016 marks the NDCâs 50 years in Rome and the 65th anniversary of its foundation by General Eisenhower. Over time, the Senior Course has evolved; from the initial participation of the founding countries of the North Atlantic Treaty, it now brings together Course Members from a diverse geographical, cultural and professional spectrum. Over the years the Course has welcomed participants from Partner countries such as, Algeria, Georgia, Kuwait, Mauritania, Mongolia, Morocco, New Zealand, Nigeria, Pakistan, Qatar, Switzerland, The Former Yugoslav Republic of Macedonia* and the United Arab Emirates.

The ceremonyâs guest of honour was General Denis Mercier, appointed by the North Atlantic Council as Supreme Allied Commander Transformation on 23rd March 2015. In his remarkable international career General Mercier contributed to the development of the Combined Joint Task Force (CJTF) concept from 1999 to 2002, as deputy head of the CJTF at regional headquarters AFNORTH, in Brunssum (Netherlands).

At the beginning of the ceremony, the Commandant of the NDC Major General Janusz Bojarski (POL F) welcomed a distinguished audience of Ambassadors, Military AttachÃ©s, Italian civilian and military authorities, together with Course Membersâ families, Faculty and Staff. In his introductory speech he congratulated Senior Course Members on completing the programme after 5 months of highly intensive and demanding study. He expressed his belief that the skills and knowledge acquired during the Course would be of great relevance for the future career of all participants. The Commandant also highlighted the significant role played by the College in providing Course Members with a favourable learning environment: lectures and discussions with high-level speakers and eminent experts; carefully planned visits to the capitals of many Alliance member states; stimulating Field Study trips to Partner nations; as well as the constant opportunity for networking with fellow Course Members.

In his graduation address, General Mercier - Supreme Allied Commander Transformation, spoke about needing greater flexibility in the conduct of warfare, the importance of innovative ideas and creative thinking to generate new ways to ensure strategic awareness, and the urgent need to look beyond the upcoming NATO summit in Warsaw. Quoting General Eisenhower, founder of the NDC, General Mercier said: âour real problem is not our strength today; it is rather the vital necessity of action today to ensure our strength of tomorrowâ. In the Q and A session that followed, in response to a question on the future of partnerships, he referred to individual NATO roadmaps being worked out for each Partner, as a way to amplify the countriesâ own response to current threats, such as terrorism and mass migration.

The Course President Brigadier Stephen Mcmahon (GBR A) and Vice President Counsellor JoÃ£o Terenas (PRT C) gave a farewell speech, highlighting the importance of the Course and uniqueness of the College.

The Dean, Dr Daria Daniels Skodnik (SVN C) introduced the two new awards being presented this year by the Commandant: the Eisenhower Prize, awarded for the best Senior Course Committee Study Project, went to Committee 5 for their SP on âNATOâs roadmap and priorities for the 2016 Warsaw Summit agendaâ, and the Commandantâs Prize, for the best Senior Course Individual Paper , went to Col Marc-AndrÃ© Ryter for his Paper on: âNATOâs Strategic Concept and Security in Africaâ.

During the celebration, Course Members were called individually to stand by their respective national flags and receive their diplomas from the Supreme Allied Commander Transformation, the Commandant of the NDC, the Dean and other senior NDC leaders.

Concluding the ceremony, Mr Vincenzo Di Stefano was awarded the NATO Meritorious Service Medal for distinguished service while assigned to NATO duties, which was presented by SACT as the highest NATO representative at the ceremony.

Later, a round table session was held with Gen Mercier, his delegation, the NDC Commandant, the Dean and other senior NDC leaders to strengthen further cooperation and discuss topics of common interest.

As Senior Course 127 bids farewell to the College, the inauguration of SC 128 is scheduled for 23 February 2016.

(*) Turkey recognizes the Republic of Macedonia with its constitutional name