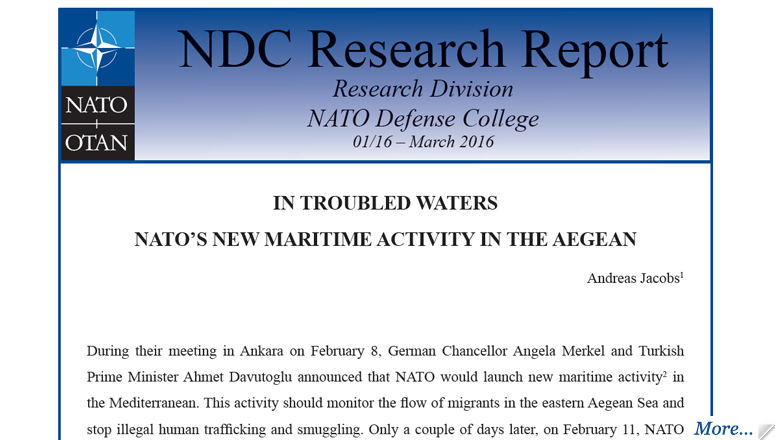 Dear Reader,
During their meeting in Ankara on February 8, 2016, German Chancellor Angela Merkel and Turkish Prime Minister Ahmet Davutoglu announced that NATO would launch a new maritime activity in the Mediterranean. This activity should monitor the flow of migrants in the Eastern Aegean Sea and stop illegal human trafficking and smuggling. Only a couple of days later, on February 11, NATO defence ministers, in a surprisingly quick move, officially agreed on the plans and announced that the Alliance would deploy one of its Standing Maritime Groups to the eastern Aegean Sea. This new, and still nameless, activity marks NATOâs first intervention in the European refugee crisis and represents an unusual and new type of mission for NATO.

This NDC Research Report explains the political background and mandate of NATOâs new maritime activity in the Aegean and discusses its operational details and prospects for success. It argues that NATOâs new Aegean activity might soon face some tough realities. Given its limited mandate, it will be quite difficult to find the delicate balance between deterring and fighting illegal human trafficking on the one hand and allowing for the possibility of refugees to legally seek asylum on the other hand. But even given its limited scope and mandate, NATOâs new Aegean activity carries an important political message. It must be seen as a part of an evolving multilateral strategy to deal with Europeâs migrantâs crisis. Additionally, the deployment of NATOâs standing Maritime Group 2 to the Aegean shows the Allianceâs willingness and ability to act and to cooperate with European institutions. In times of reduced cohesion within NATO and within the EU, and with an assertive Russia at the borders, this is no insignificant step.

We hope you enjoy this paper.
Regards,
Jeff