On the evening of Thursday 17 March 2016, Senior Course 128 arrived in London, on the third leg of their initial Field Study. They were warmly welcomed by the Rt Hon Earl Howe, Minister of State for the Ministry of Defence and Deputy Leader of the House of Lords, during a reception hosted at the MOD Memorial Courtyard. 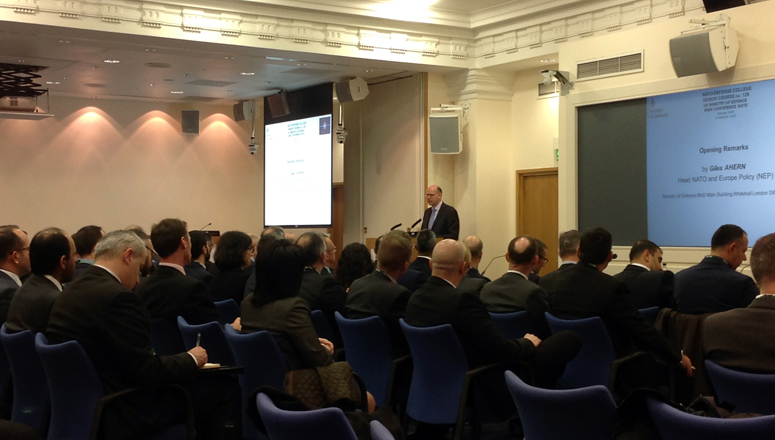 The next morning, the group returned to the Ministry for a series of briefings on the UK's global outlook within the current international environment, its commitment and contribution to operations, its foreign policy and defence interface, and its role and position within the Euro-Atlantic security organizations (NATO, EU, OSCE), as well as on the British developmental approach to conflict and instability. A panel of distinguished speakers, headed by Mr Giles Ahern, Head of NATO and Europe Policy at the MOD, with Group Captain Dan Storr from the Ministry of Defence (Operations Directorate), Ms Lisa Chesney and Ms Melanie Hopkins from the Foreign and Commonwealth Office (both at the Security Policy Department), and Ms Bianca Jinga from the Department for International Development, provided an excellent overview of the challenges faced by the UK and the security, foreign and development policies the country is combining, in a âwhole of governmentâ approach, in order to tackle them.

The session concluded with a most lively and interesting question & answer period with the panel of lecturers, during which a wide range of contemporary issues was covered. It gave Course Members the opportunity to enrich and expand their appreciation of the major political and security concerns of one of the key European members of the Alliance, thus fulfilling in the best possible way the main aim of their Field Study.