On Friday 1 April, the fifteenth NATO Regional Cooperation Course (NRCC-15) and members of the Middle East Faculty (MEF) travelled to the University of Naples âLâOrientaleâ. 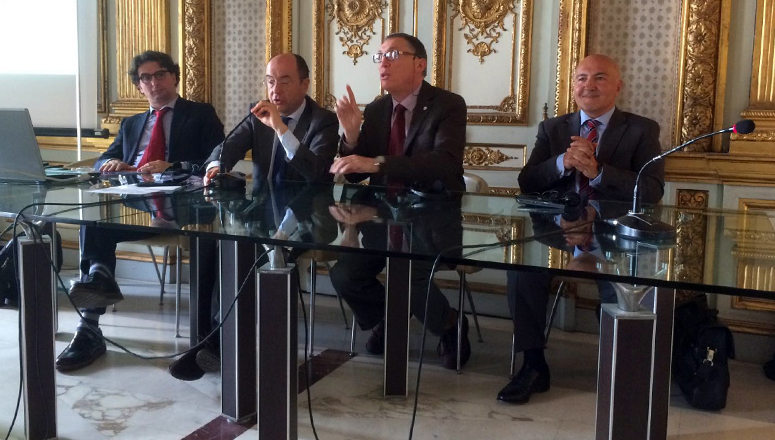 The aim of the visit was to attend a lecture and discussion on the subject of âMigrations through Mediterranean Corridorsâ.

Prof. Giuseppe Cataldi presented his lecture, entitled âMigrations through Mediterranean Corridors: Some Law of the Sea and Human Rights Issuesâ. Giuseppe Cataldi is Professor of International Law at the University of Naples âLâOrientaleâ, and Director of the Jean Monnet Centre of Excellence on Migrantsâ Rights in the Mediterranean.

At the end of the lecture, Michele Corleto, a researcher in international law and a member of the Jean Monnet Centre of Excellence Steering Committee, moderated a lively Q&A session. Hasan Aygun, former NATO Chief Political Advisor, then provided the concluding remarks, focusing on the complexity of the migration problem and its relationship to ongoing conflicts in Syria.

The success of this special day for NRCC-15 was made possible by the University of Naples âLâOrientaleâ in cooperation with the NATO Defense College.

The University of Naples âLâOrientaleâ traces its origins back to the Chinese College founded by Matteo Ripa, a lay priest and missionary. It was Clemente XII who granted the Chinese College official recognition, on 7 April 1732. The aim of the institution was to train young Chinese people as priests, so they could spread the Catholic religion back in their own country. One of the original aims of the College was also to train people as interpreters of Indian and Chinese languages, to work for the Ostend Company.
Over the years new languages were introduced and this led to the closure of the missionary section, after which the Institute was awarded university status. The âOrientaleâ today is the oldest school of Sinology and Oriental Studies in the whole of Europe.1

According to the Universityâs Rector Elda Morlicchio, since the very beginning âLâOrientaleâ has set itself up as a centre for learning and research which aims to focus on points of contact between different cultures.2