On 4th April, H.E. Ambassador Fatih Ceylan, Permanent Representative of Turkey to NATO, visited the NATO Defense College and delivered a lecture of opportunity to SC 128 and NRCC 15. 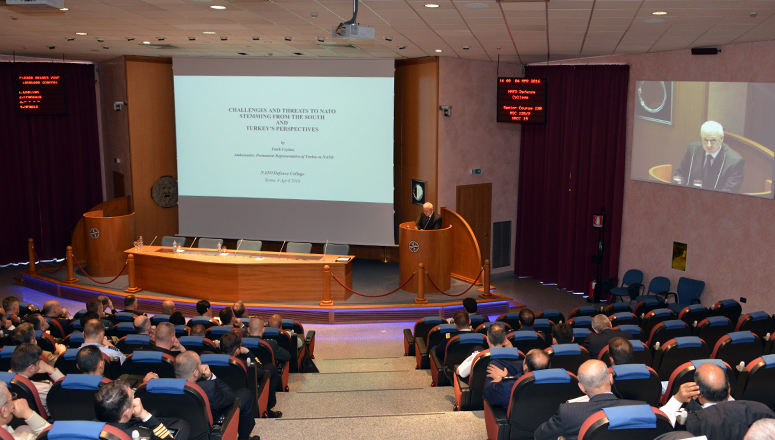 Ambassador Ceylan spent some time in conversation with the Commandant and the Dean, before being briefed by Col Mathiassen (DNK F) about the NDCâs mission and the main features of College courses.

After a brief introduction by the Commandant, Ambassador Ceylan delivered his lecture of opportunity entitled âChallenges and Threats to NATO stemming from the South and Turkeyâs perspectivesâ. He mostly focused on the challenges and threats that NATO is facing currently and emphasized the importance of having a single, strong voice. His speech was followed by a Q&A session, in which he answered questions about the forthcoming Warsaw Summit and EU-NATO cooperation against hybrid warfare. The discussion was moderated by Min. Plen. Ari.

The Ambassador later met with the Dean to discuss academic matters.

Before being appointed to his current position on 20 September 2013, Ambassador Ceylan had been Turkish Deputy Undersecretary for Bilateral Political Affairs since September 2010. Prior to assuming this position, he was Director General for Bilateral Political Affairs for Eastern Europe, the South Caucasus and Central Asia between 2009 -2010, and Ambassador to Sudan from 2006 until 2009.

His service as Deputy Director General of the NATO Department from 2004 until 2006, as Head of the NATO Department from 2002 until 2004, and as Deputy Permanent Representative at the WEU and the EU in charge of security and defence matters from 2000 until 2002, together with his successive appointments as First Secretary at the NATO Military Affairs Department - coinciding with the end of the Cold War (1988-1990) - and as First Secretary and Counsellor at the Turkish Permanent Mission to NATO (1990-1995), notably contributed to his vast knowledge and experience of NATO and security and defence issues, making him one of the most distinguished career diplomats in the Turkish Foreign Service.