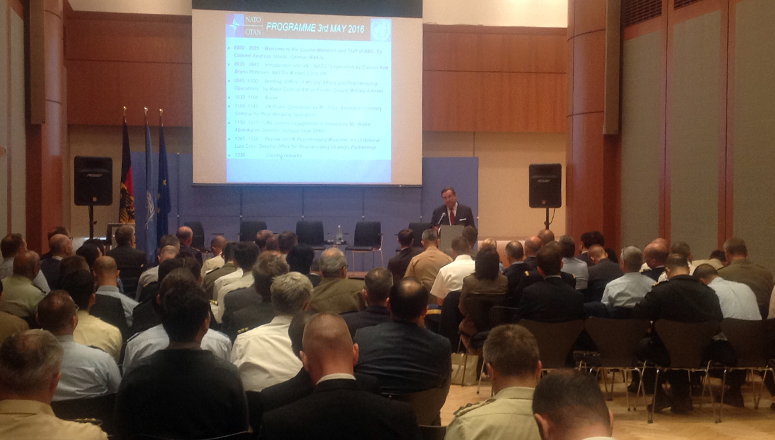 Senior Course 128âs second Field Study commenced with an excellent visit to the United Nations in New York City, in a venue kindly provided by the Consulate of the Federal Republic of Germany to the UN. An introductory brief by the NATO Liaison Officer to the UN, Colonel Kim Bruno Petersen, disclosed how European partner efforts within the UN mission in Mali, working alongside France and EU organizations, are setting a new standard for UN Peacekeeping Operations (PKO). This new partnership cooperation is guiding how NATO will enhance its own cooperative activities with the UN, particularly in the areas of logistics and medical support, command and control structures and procedures, operations standards, women, peace and security initiatives, and intelligence sharing.

A series of informative briefings followed. Major General Adrian Foster, Deputy Military Advisor, spoke of the challenging context within which PKO occurs today, with asymmetric threats made all the more relevant by cross-border flows of ideas, weapons, funds, fighters and illicit enrichment trade that exacerbate intra-state conflicts. He stressed the significant changes occurring within the UN HQ in New York to improve strategic, operational and tactical level PKO activity. Mr Dimtry Titov, Assistant Secretary-General for PKO, reinforced the first brief by discussing the positive reforms currently being implemented in the wake of the 2015 Global CHODs meeting in New York, the seminar of 55 state leaders held in September last year, and the submission of the High Implementation Panel for PKO (HIPPO) report. Pledges and proposals made through these initiatives could increase the current 125,000 deployed PKO troops by an additional 45,000, reinforce helicopter and intelligence resource support to UN PKO, and enhance partnership activities in the manner identified by Col Petersen.

The practical implementation of these reforms set the context for the final briefings of the day, the first by Mr Walid Abdelkarim, Director of the Somalia Desk PKO, who spoke of the challenges facing AMISOM in Somalia and how the UN desires to assume the mission there with enhanced capacity while still supporting the use of regional organizations such as the AU. He also disclosed that lessons from Somalia were being considered for a possible mission in Libya, should the UN be asked to set one up there. The final briefing discussed how the UN is evaluating and improving PKO troop performance, and deals with soldier criminality by inspection, training and disciplinary proceedings. This fascinating briefing was delivered by LtGen Luis Cruz, Director Office for Peace Keeping Strategic Partnership. Both speakers stressed the potential for further UN-NATO cooperation.

In summary, SC 128 received a superb series of briefings by senior UN officials who had prepared and delivered exactly the type of knowledge-enhancing presentations envisaged in the College objectives. Course Members are now much better aware of ways in which NATO-UN cooperation can continue to improve in the future.