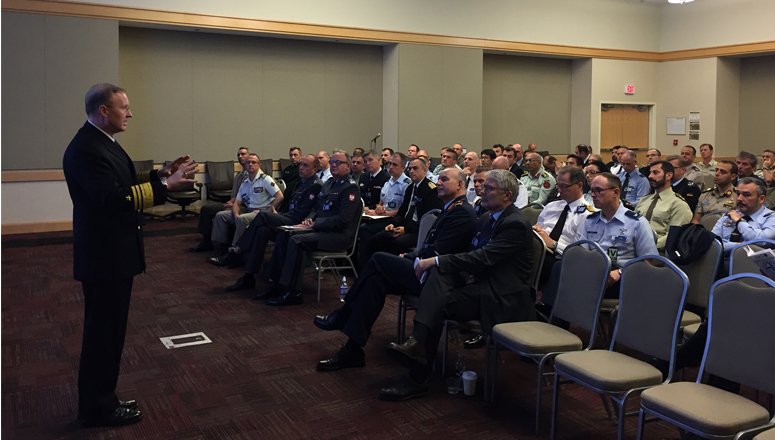 After an interesting tour of the Pentagon, which exposed Course Members to the long traditions and pride of each of the services of the United States Department of Defense, the course were presented with a briefing on the current U.S. National Military Strategy by VADM Frank Craig Pandolfe, Assistant to the Chairman of the Joint Chiefs of Staff. VADM Pandolfe challenged Course Members to discuss with him their views regarding the global strategic environment as articulated in the current U.S. NMS. This produced a stimulating and useful dialogue.

A second Defense Department briefing was provided by the Deputy Assistant Secretary of Defense for European and NATO Policy, the Honorable James J. Townsend, Jr. The brief concentrated on the role of his office in bringing the military-political aspect and perspectives together in U.S. policy-making regarding Europe and NATO. Mr Townsend reiterated that the current challenges faced by NATO, and the U.S. within NATO, are unprecedented. He opined that the U.S. would like to see the Alliance reinvest in Collective Defense, even if that impacts NATO expeditionary (Crisis Management) capacity, in order to create a "strong and balanced" approach to Russia, focused upon enhanced deterrence, as well as renewed dialogue. His office also promotes within U.S. policy circles the need for a strong Alliance and a strong EU, involving strong U.S. commitments to both organizations.

In the afternoon of 6 May, SC 128 visited Capitol Hill to gain knowledge of the workings of the U.S. government. Mr. John Daly, Special Legislative Assistant at the USMC Office of Legislative Affairs, explained in a candid manner the role of service offices on Capitol Hill in representing the service and the executive branch's defense policy decisions to members of Congress. These Army, Navy, Marine, and Air Force offices, each with a General or Flag Officer and staff, have the task of securing support from congressional members for that service's procurement, establishment and policy objectives. This is a unique military-political structure and function, without equal in the Alliance, knowledge of which helps provide context to U.S.-NATO relations.

Professional Staff Member of the Senate Foreign Relations Committee, Mr David Kinzler, gave SC 128 the last formal briefing of the day on the topic of the U.S. Congressional committee system and foreign policy. He explained how individual members can raise legislative proposals to the relevant committee for their review, amendment and approval before moving to the floor of the Senate and the House for discussion and a vote. Such processes do not craft foreign policy (that is done in the Executive Branch), but proposals can shape and amend policy proposals that need Congressional commitment of resources. Both of the afternoon briefings enabled Course Members to understand internal workings of the U.S. Government and how they relate to military and foreign policy-making.

The day culminated with a quick tour of the Capitol itself.