The final events of the visit to Washington DC for SC 128 involved briefings and question and answer sessions with Ms Angelica Silvero, Head of the World Bank Speakers Bureau, and Mr. Patrick Cirillo, Principal Assistant to the Secretary of the International Monetary Fund. 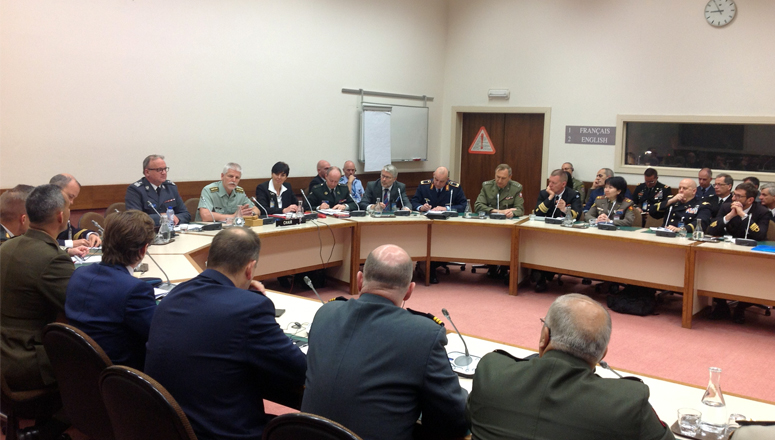 Occurring at the World Bank location, the briefings presented the history, role, and challenges of World Bank and IMF activities. The mechanisms for low income countries to borrow money, and the issues concerning post conflict reconstruction were discussed in detail; the different focus of the two institutions and their interaction with other global and regional organizations was covered, and the course members were left with a clear idea of current and future implications of economic and financial forces upon the global security environment.

At NATO Headquarters, the Course had the privilege of hearing addresses by General Petr Pavel, Chairman of the Military Committee. General Pavel explained the role of the Military Committee, then discussed the "arc of instability and crises" around Europe, divided by different challenges in the east and south. Russia has chosen in the east to use the military instrument of power to achieve national interests in ways that NATO failed to anticipate early on, but which are now manifest and in need of strong deterrence and measured responses. The Chairman opined that such responses must appreciate that NATO's relationship with Russia needs to be balanced and open to multi dimensions of engagement. In the south the challenges of ongoing conflicts in Syria and Iraq and Libya, tensions in Israel, Gaza and the Sinai, and the weakness of states and institutions throughout the southern regions, exacerbate the threats posed by terrorism and mass migration to NATO members. The Alliance is committed to working with regional partner countries and organizations such as the EU to contain threats and address comprehensively the root causes of regional instability in the south. NATO will demonstrate such commitment at the upcoming Warsaw Summit.

Mr Morten Hendriksen, Deputy Head Operations Division (Afghanistan) of the International Staff, then spoke to SC 128 about the evolution of NATO activity in Afghanistan. Operation Resolute Support is currently committed to training, advising and assisting Afghan security forces at the institutional level, since the Afghans themselves have assumed responsibility for all tactical training and employment. The future of the mission, particularly NATO support to sustainment and resource development of Afghan security forces beyond current mission deadlines and enduring partnership activities will be discussed at the Warsaw Summit.

Dr Jamie Shea, Deputy Assistant Secretary General, Emerging Security Challenges Division, International Staff, delivered a frank and realistic assessment of the challenges facing the Alliance. He discussed the issues of creating more effective collective defence and deterrence within the context of new challenges in the east, including those posed by hybrid threats in our everyday "Phase 0" condition. Dr Shea also outlined NATO's concerns and potential responses to extreme challenges on it's southern flank. U.S. - NATO relations, EU -NATO relations, and NATO - Partner relations were also discussed in reference to the upcoming Warsaw Summit.

"The Road to Warsaw" was the topic of a brief provided by Mr Gabriel Bernier, NATO Defence Policy and Planning Division. He posited that the Alliance's main focus in Warsaw will be the provision of coherence to the myriad activities, initiatives, and plans being worked on to address the challenges faced by NATO. His briefing dovetailed well with the following session, delivered by Mr James Mackey, Head of Euro-Atlantic and Global Partnerships, Policy Affairs and Security Policy Division on the topic of Partnership. Mr Mackey explained the renewed emphasis being placed upon partnership within the Alliance as a means to achieve greater national and regional security in a world fraught with security challenges. Enhanced defense institutions, greater government transparency and commitment to the rule of law, and improved interoperability between partners themselves, and partners and NATO, has proved to be a very effective means to counter threats and create unity of effort on operations. NATO's role as a hub for information and education exchanges and as a facilitator of good partnership security is affirmed.

Taken together these excellent briefings at NATO HQ have provided a great overview of current challenges and opportunities for the Alliance as it prepares to meet in a unifying summit in Warsaw this summer.