The final round of visits by Senior Course 128 on Field Study 2 centred upon four separate Headquarters in Belgium. After visiting NATO HQ (see previous post), the Course went to the European Union where RADM Waldemar Gluszko, Deputy Director General European Union Military Staff, presented a briefing on the role of the military within the EU. He first explained the evolution of EU military policy and activity and EU military decision-making procedures and structures. The role of the EU Military Staff is currently limited to Early Warning, Strategic Assessment, and Planning. But with over 5000 soldiers and 1400 civilians now deployed on a total of 17 EU missions (6 military, 11 civilian), there is a growing requirement for closer cooperation between this staff and other organizations, including NATO. This is occurring with regard to capability development and operations planning, but there remain challenges regarding formal information sharing. Mr Oliver Dajic, Desk Officer NATO Crisis Management and Planning Directorate, reinforced this message when he provided a briefing on the evolution of NATO-EU relations since 2003, with emphasis on improvements coming by necessity in the wake of challenges posed by mass migration. Constraints in formal relations are now being mitigated by improved informal cooperation and coordination. From these briefs, Course Members were left with a much better understanding of the complexities and potentials of inter-organizational cooperation. 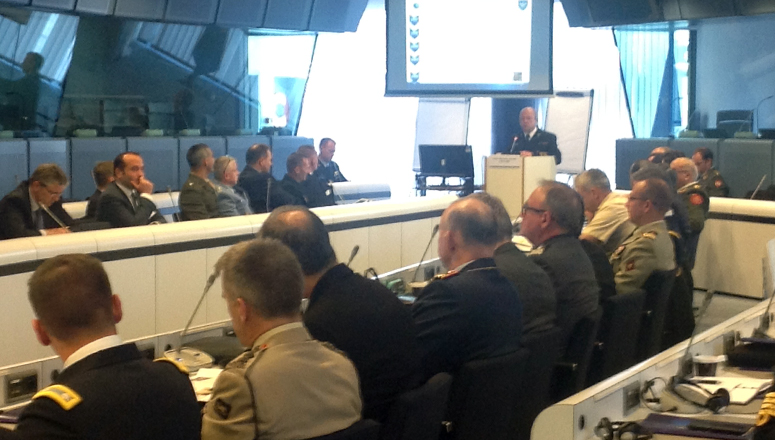 SC 128 visited Supreme Headquarters Allied Powers Europe on 12 May 2016. Hosted by MGen Joseph T. Guastella, Deputy Chief of Staff Operations and Intelligence, the Course received excellent briefings on the role of NATO Special Operations Headquarters, the role of the Comprehensive Crisis Operations Management Centre (CCMOC), an update on threats to the eastern and southern flanks, NATO planning efforts, and lessons learned regarding partnership operations. These were followed by an open and extremely beneficial question and answer period with MGen Guastella; BGen Nico Tak, Director of the CCMOC; Colonel FrÃ©dÃ©ric Gauthier and LtCol Mike Kimberly, SHAPE J5; Col Dirk Brodersen, Deputy Director CCMOC; and Ms Jordan Slopey, Acting Director NATO Special Operations Headquarters Commander's Action Group. Course Members quickly came to appreciate the tremendous scope of planning effort at SHAPE, the high tempo of staff work, and the challenges faced when producing the best military advice possible to NATO HQ. The session complemented nicely the visit to SACT, conducted the week before, and the NATO HQ visit of the previous day. The working relations between all three senior NATO Headquarters are now very clear to all participants.

Field Study 2 appropriately ended with a visit to the host nation's senior Headquarters, the Belgium Defence HQ, where SC 128 was warmly welcome by LtGen Guy Buchsenschmidt, Deputy Chief of Defence for Strategic Affairs. During a follow-on brief provided by Maj Lutgard Ruys, Department of Strategic Affairs, Course Members learned about the considerable challenges faced by Belgium military forces and the admirable performance of these professional forces in the face of demanding international commitments, domestic threats, and budget concerns. CDR Hans Huygens of the same Department added to this knowledge by presenting a brief on the considerable BENELUX military cooperation. Ambassador Paul Huynen, Director Security, Ministry of Foreign Affairs, talked to SC 128 about the manner in which Belgium crafts Foreign Security Policy within coalition governments. Diplomacy, Development, and Defence resources and initiatives combine to form a united (3D) approach to all Belgian foreign security commitments. It was obvious from these briefs that, while supporting multilateralism, Belgians maintain a certain priority for NATO-EU cooperation and the Transatlantic Bond. The entire NDC group felt particularly appreciative of the superb work of Belgian military hosts - and Col Jan Abts of the NDC - in making this portion of the Field Study a complete success.

The cumulative impact of the learning opportunity provided by Field Study 2 was significant and obvious to every Course Member. Visits to the UN, EU, World Bank and IMF granted knowledge of, and appreciation for, the role of these organizations in the global security environment. Visits to NATO Headquarters and the two strategic Headquarters, ACT and ACO, provided an integrated overview of all aspects of NATO activity. Visits to the capitals, Washington and Brussels, completed this learning by cementing understanding of the enduring value and importance of NATO's Transatlantic Link.