Visit of the Latvian CHOD 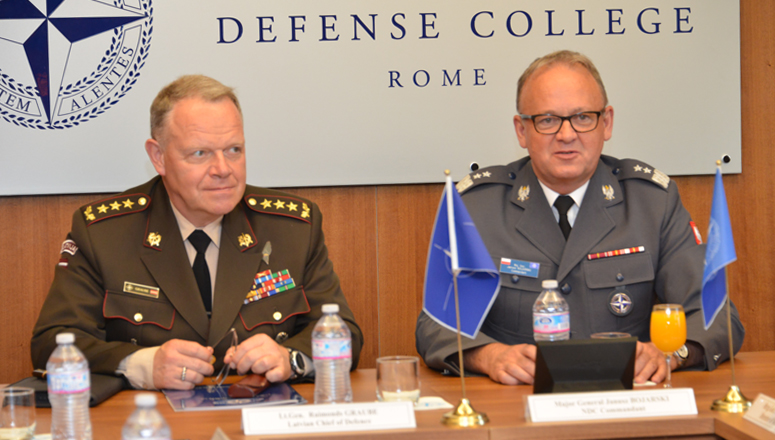 Upon arrival, Lieutenant General Graube was warmly welcomed by NDC Commandant Major General Janusz Bojarski (POL F) and Director of Management Brigadier General Salvatore Carta (ITA A). After an office call during which LtGen Graube spent time in discussion with the Commandant and institutional gifts were exchanged, the Latvian delegation was briefed by the Commandantâs MA Col K. Marselis (NLD F), who presented the fundamentals of the NDCâs mission and the main features of College courses.

The aim of the visit of the Latvian CHOD was to strengthen relations between the College and the Republic of Latvia. Since its entry into the North Atlantic Treaty Organization on 29th March 2004, Latvia has been a valuable partner for NATO, participating in international operations and supporting Alliance security measures. Thanks to the visit, the Latvian Chief of Defence was able to reacquaint himself with the NDC where, in 2003, he took part in the GFOAC, thereby gaining first-hand insight into the unique contribution to strategic-level education and research made by the College.

Chief of Defence of the Republic of Latvia, LtGen Raimonds Graube, was born in 1957, Riga, Latvia. He has become Chief of Defence of Latvia in 2010, while previously he was Ministry of Defence Deputy Secretary for Defence Capability Development in 2019 and Military Representative to NATO/EU in 2008. In 2012 he received the prestigious Royal Norwegian âOrder of Meritâ.