Senior Course 128 arrived in Denmark as part of its third Field Study. On 15 June 2016, the programme started with a briefing by Ambassador Charlotte Slente, Undersecretary for Global Politics and Security in the Ministry of Foreign Affairs. She gave a broad presentation on how Denmark envisions global and European security, referring to risks and challenges ahead. She underlined the complexity and unpredictability of these emerging issues, on the eastern and southern borders of the Alliance, in particular. She emphasized that non-state actors are increasingly taking more risks to undermine the security and stability in the regions surrounding NATO. Ambassador Slente pointed out that security policies should include wide ranging foreign and security policy instruments. A combination of diplomacy, economic policy, development assistance, environmental policy and other possible related tools should be used in a more coordinated way and in a comprehensive approach in order to tackle the root causes of instability at early stages. According to Denmark, solutions should be transnational. Undersecretary Slente stressed that the key institutions for Denmark are NATO and the European Union to overcome risks, challenges and threats. 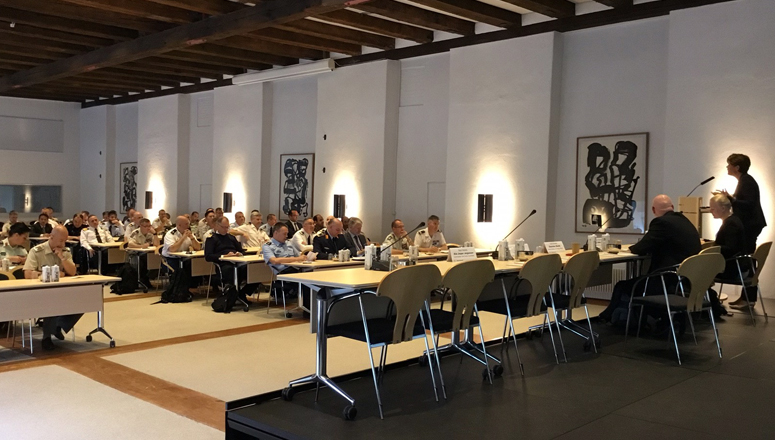 Following the foreign policy briefing, Mr Jens Oddershede from the Ministry of Defence delivered an assessment of his country's security and defence policy. He focused on the strategic goals of this policy, which are to promote Denmark's security and prosperity based on the core values of freedom, democracy and human rights. He stated that this policy also aims at promoting a world order characterized by stability, security, cultural coexistence, sustainable progress and the international rule of law. Mr Oddershede detailed the security issues on "Denmark's radar", which are terrorism, cyber threats, migration and refugee flows, the situation around the eastern and southern borders of NATO and in the Baltic region, and the situation in the Arctic area. Mr Oddershede finalized his remarks by turning the attention of the audience to the fact that no country can cope with the complex, multiple and simultaneous security challenges by itself, therefore coherent international cooperation is required.

The Course had the privilege of hearing General Peter Bartram, Chief of Defence of Denmark, who further broadened the knowledge of the NDC delegation on a variety of military issues from a strategic perspective. Addressing the NDC Senior Course for the third time, General Bartram's very informative briefing covered Denmark's strategic position in Europe and in the world, within its available forces. He emphasized that todayâs threats are game-changers, geographically close, unpredictable and diverse, and different in nature from the threats faced in the past. He also offered his views on how to overcome the emerging threats militarily by enhancing capabilities, and Denmark's national development of required capabilities and capacities.

The last briefing to Senior Course 128 in Copenhagen was provided by Major General Kim Jesper Jorgensen, Commander of the Joint Arctic Command. He touched upon the tasks of Danish defence in the Arctic, the assets and units required, the drivers for change in the region and the development of international cooperation. Major General Jorgensen enumerated the tasks of the Danish Joint Arctic Command, such as surveillance, upholding sovereignty, search and rescue, oil spill response and support to civilian society.

After the panel discussion with some challenging questions posed by Course Members to the speakers, Brigadier General Salvatore Carta, Head of the NDC delegation, thanked General Peter Bertram for making his time available for the NDC Field Study visits in Copenhagen and for the warm hospitality extended to the Senior Course. Brigadier General Carta also expressed the NDC delegationâs appreciation to the Danish officials for their insightful briefings.