On 16 June 2016, Senior Course 128 arrived in Norway and immediately started its programme by meeting Ms Anniken Huitfeldt, Chairperson of the Standing Committee on Foreign Affairs and Defence of the Parliament. She explained parliamentary debates on Norway's current position in face of current global strategic developments. In this respect, Ms. Huitfeldt offered her views on the developments along NATOâs eastern borders, as well as on the situation in the Middle East, while placing emphasis on the provision of necessary capabilities for credible deterrence and on budgetary developments. Norway's Long Term Defence Plan, which was made public on the following day, was also analysed by Ms Huitfeldt, from a parliamentarianâs perspective. The briefing at the Parliament was followed by a gracious social event hosted by Lieutenant General Erik Gustavson, Chief of Defence Staff. 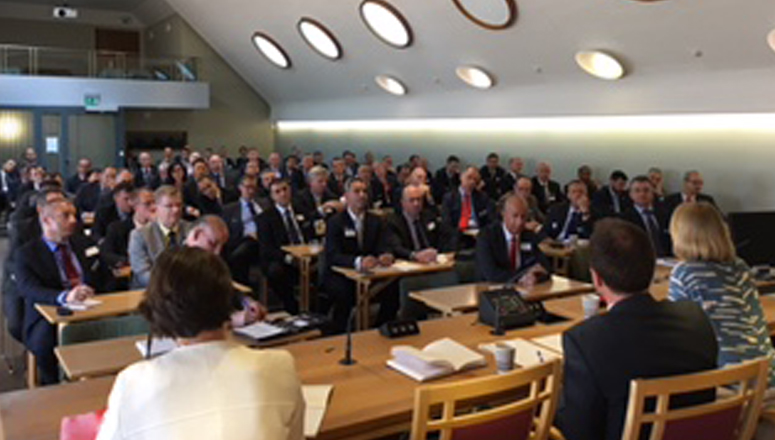 On 17 June 2016, a very intensive schedule started. The NDC delegation was welcomed by Brigadier General Terje Killi, Deputy Director-General for Security Policy of the Ministry of Defence, who gave Norway's interpretation on global and regional security challenges and reconfirmed his country's NATO commitments to common defence, deterrence and security. He stressed the importance of NATO's providing defence for Allies, with a 360 degree approach to counter any threat coming from any direction. He mentioned the elements of a credible deterrence within a Norwegian security framework to ensure consistent and comprehensive strategies for the Alliance, while stating Norway's expectations from the upcoming NATO Summit.

A lecture by Prof. Rolf Tamnes of the Norwegian Institute for Defence Studies broadened Course Membersâ understanding of Norwegian security policy from an academic perspective. The speaker underlined that Norway is facing traditional security threats; however, there are also new elements, such as cyber. He voiced his concerns on how these threats are undermining the liberal world order. In this regard, he outlined Norway's security policy priorities at home and abroad, namely the North, the Baltic region, the South (Turkey), international operations abroad, and deterrence and resilience at home. He reviewed NATO's existing structures and strategies, maritime strategy in particular, in the run-up to the Warsaw Summit. In response to a question, Prof. Tamnes stressed that Norway attaches great importance to NATO solidarity and Article 5 of the Washington Treaty in this regard.

The delegation also received a very interesting briefing from Mr. Ole Anders Lindseth, Director-General at the Ministry of Petroleum and Energy, on oil and gas activities. He provided Course Members with some information on projected global energy mix in 2013-2040 and also on divergent views about these projections. Energy saving and energy efficiency should be put on the agenda of countries, while at the same time developing environmentally friendly renewable energy strategies, according to Mr. Lindseth, who went on to further elaborate on the main principles of Norwegian petroleum policy. He explained how industrial life is integrated in these sectors, as well as how a sustainable resource management is conducted in Norway, which aims at balancing of economic activity, the social dimension and climate /environmental concerns. Course Members appreciated this opportunity to receive detailed information on the delimitation lines and continental shelf areas in the Arctic.

The programme continued with a presentation by Mr Kristoffer Bjorklund, Senior Advisor at the Ministry of Trade, Industry and Fisheries, who gave some perspectives on the management of living marine resources in Norwegian waters. Assessing the foreign and security policy implications of the topic, Mr Bjorklund stressed that Norway is a nation with a major marine responsibility, outlining recent statistics on the fisheries sector. Referring to joint management of shared stocks in this sector, he stated that 90% of Norwegian catches are derived from shared stocks and that controlling the fishing on shared fish stocks requires close cooperation among the coastal states. He gave examples of bilateral and coastal state fish stock management negotiations with Russia, the EU and Denmark (Greenland and Faroe Islands).

The assessment of Mr Jonny Didriksen, Senior Advisor at the Norwegian Joint Headquarters, on the activities and challenges in the High North from a Norwegian perspective brought great added value to Course Membersâ knowledge. Senior Advisor Didriksen stressed that, in order to conduct operations in the High North, there are some basic elements that should be taken into consideration, such as the interests of many other countries in the same region. He painted a picture of some ongoing activities in the region and their meaning for Norway and NATO. Mr Didriksen pointed out the advantages of situational awareness in the region for strategy and policy development, and the importance of a dynamic toolbox which ensures this awareness. He spoke about Norway's increased military presence in the High North and explained that the Comprehensive Approach is not new for his country, as Norway has been employing this concept for a long time in the High North.

The afternoon programme started with a session in which Ms Signe Astrup Arnesen, Director at the Norwegian Security Police Service, touched upon the security issues related to terrorism. She explained in detail the reasons for current and potential terrorist threats stemming from radicalism, as well as from right and left wing extremist circles directed against - as well as within - Norway. She summarized a number of measures taken and preventive work performed by the Norwegian authorities in this regard.

Finally, Senior Course 128 had a comprehensive presentation from Specialist Director Dr Sunniva Tofte from the Ministry of Defence, who outlined the new long-term national defence plan. She gave an overview of this plan, which had been made public only a few hours before. Ms Tofte elaborated on the logic of the defence plan review, the external factors affecting the Norwegian security environment, the impact of these factors on the internal security situation and the national defence structures, such as the of armed forcesâ new technical capabilities and financial requirements. She placed special emphasis on the use of new technologies in defence planning, which will include improved availability and endurance, increased activity and presence and investment in vital capabilities (surveillance, submarines, air defence, intelligence and fighter aircraft). The speaker also paid special attention to the sustainability issue within the framework of the new defence plan, covering budget increase, continued modernization and efficiency measures as well as force structure adjustments.

An interesting question and answer session took place, with the participation of Deputy Minister of Defence Mr Oystein Bo, greatly contributing to Course Membersâ knowledge of contemporary security issues in this part of the world.

Concluding remarks were given by Major General Janusz Bojarski, Commandant of the NDC, who expressed the gratitude of the NDC delegation for the intensive programme and excellent hospitality extended to Senior Course 128 in Oslo.