Senior Course 128 arrived in Azerbaijan on 22 June 2016, as its final destination within the framework of its third Field Study. On the following day, the programme commenced with the welcoming remarks of Mr Fariz Ismailzade, Vice Rector of the Azerbaijan Diplomatic Academy (ADA) University, who also gave a short introduction on the history of Azerbaijan, multicultural life in the country, its economy, human resources and the teaching of diplomacy at the ADA University. He expressed the ADA Universityâs pleasure at hosting the SC128 in his country, by referring to the Azerbaijani proverb that âIt is better to visit a place once, rather than hear about it seven timesâ. 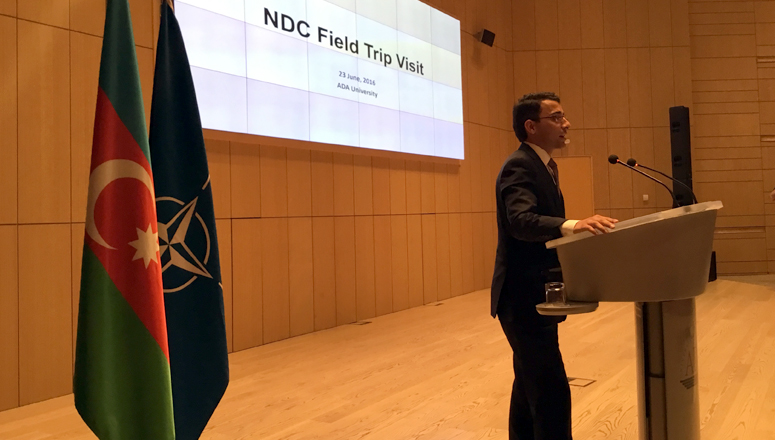 The delegation heard a very informative presentation on the defence policies of Azerbaijan, including the Nagorno-Karabakh conflict, from Major General Huseyn Mahmudov, an Ancien of the NDC and Head of the International Military Cooperation Department of the Ministry of Defence. In his broad analysis, Major General Mahmudov said that up to 100 ethnic and religious groups live together in the region, which serves as a valuable bridge from east to west. He explained the historical importance of the region and factors affecting the regional security environment. He voiced concerns over the militarization of the region, while expressing hopes of a positive result at the end of the ongoing negotiations about the conflict. Major General Mahmudov underlined that tensions in the region affect Azerbaijan's furthering of its relations with NATO. Explaining the use of NATO standards in the development of national policy documents, Major General Mahmudov stressed that Azerbaijan has cooperated with the Alliance for the past 22 years as an operational partner. He concluded his remarks by providing SC128 with some concrete examples of Azerbaijan's contribution to NATO operations and capabilities.

SC 128 then listened to Mr Gaya Mamadov, Head of the International Security Department at the Ministry of Foreign Affairs, who outlined Azerbaijani foreign policy priorities. He focused on three pillars, namely political independence, territorial integrity and sovereignty. He made it clear that the Nagorno-Karabakh conflict challenges these three pillars. He provided a retrospective view on the political aspects of the conflict and went on to further explain the main principles of international law in this regard. Mr Mamadov also referred to the ongoing negotiations to solve the conflict. Paying attention to the importance of geography in the formation of foreign policy, he explained that Azerbaijan aims at establishing and maintaining good relations with all its neighbours, taking into account cultural and religious commonalities.

Field Study 3 briefings ended with a presentation on the national policy of Azerbaijan regarding counter-terrorism efforts, with the following main message: âTerrorism has neither religion, nor nation.â The briefing also included information about the activities of some terrorist organizations directed against Azerbaijan.

Major General Janusz Bojarski, Commandant of the NDC, expressed the gratitude of the College to the Azerbaijani authorities for their excellent handling of arrangements for SC128âs visit.

During its stay in Baku on 23 June 2016, Senior Course 128 also had the privilege to visit the Heydar Aliyev Centre, which houses conference and gallery halls and a museum.

Throughout Field Study 3, Course Members came into contact with many different cultures, broadening their knowledge and understanding of regional issues and their relevance for NATO policies. Just two weeks before the NATO Warsaw Summit, the Field Study provided a unique opportunity to hear first-hand about different countries' defence and security policies within the global security environment. The objectives of this final Field Study were thus achieved.