On 28th June 2016, H.E. Ambassador Masafumi ISHII, Ambassador of Japan to the Kingdom of Belgium, visited the NATO Defense College. The Defence AttachÃ© of Japan to Italy, Capt (N) Takashi NARA, escorted him. The aim of the visit was to deliver a lecture of opportunity to SC 128. 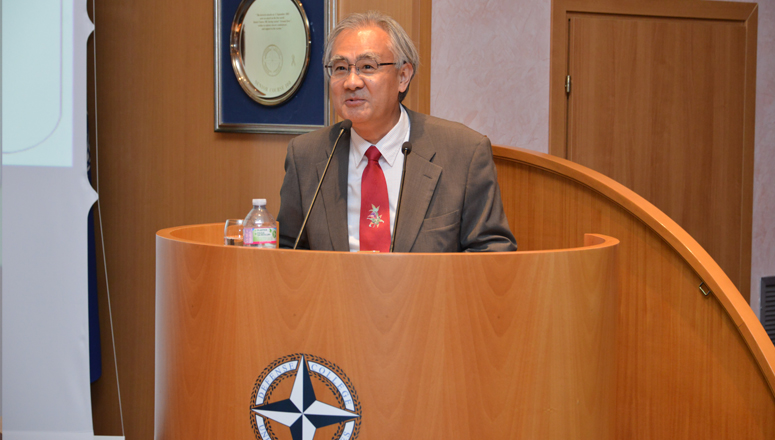 Upon arrival, H.E Ishii was warmly welcomed by the Dean of the NDC, Dr Daria Daniels Skodnik (SVN C), the Director of Management Brigadier General Salvatore Carta (ITA A), and the Head of the Academic Operations Division Major General Pascal Valentin (FRA F). After an office call during which the Ambassador spent time in discussion with the Dean and institutional gifts were exchanged, a lecture focusing on Japan-NATO relations was given by Ambassador Ishii. During his speech, the Ambassador stressed the importance for EU, Europe and democracies in Asia, including Japan, to share visions and act jointly in order to address common security challenges.

Ishii Masafumi joined Japanâs Ministry of Foreign Affairs in 1980 and, throughout his 35-year career, he has been deeply involved in policy planning and the security policy field, among others. Since September 2014, he has been in Brussels as Ambassador Extraordinary and Plenipotentiary of Japan to the Kingdom of Belgium, and is concurrently the Representative of the Government of Japan to NATO. He is also Ambassador in charge of Public Diplomacy in Europe.