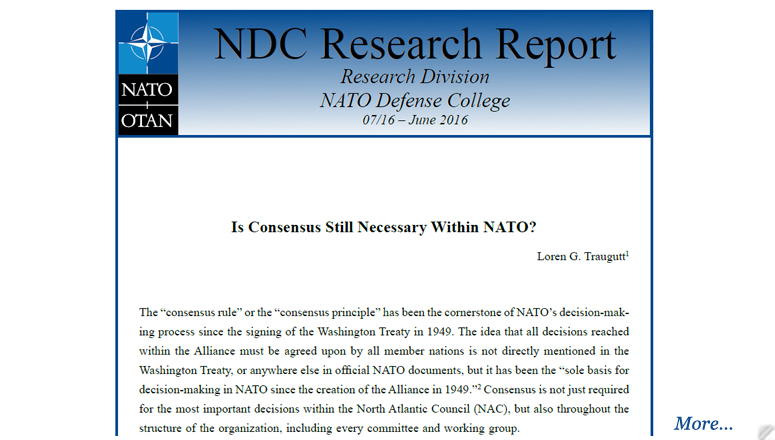 This Research Report discusses one of the fundamental processes by which the NATO Alliance operates and takes decisions: the principle of consensus.

As the author states, the âconsensus ruleâ or the âconsensus principleâ has been the cornerstone of NATOâs decision-making process since the signing of the Washington Treaty in 1949. The idea that all decisions reached within the Alliance must be agreed upon by all member nations is not directly mentioned in the Washington Treaty, or anywhere else in official NATO documents, but it has been the sole basis for decision-making in NATO since the creation of the Alliance in 1949.

Consensus is not just required for the most important decisions within the North Atlantic Council (NAC), but also throughout the structure of the organization, including every committee and working group. While sticking steadfastly to the consensus rule gives the Alliance a credibility on the world stage not seen by any other alliance in history, many experts and critics argue that this decision-making process should be reconsidered and adjusted. They argue that as the Alliance continues to grow and expand its geographical focus outside traditional European borders, the use of the consensus rule must be scrapped to keep the Alliance agile and adaptable.

We hope you find this paper helpful in reaching your own decision as to whether the consensus principle is a positive or negative aspect of NATO.