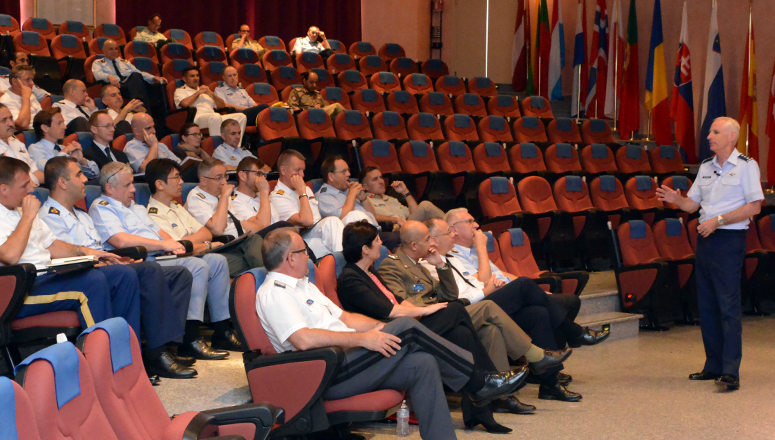 Upon arrival at the College, General Schissler was welcomed by the Commandant of NDC, Major General Janusz Bojarski (POL F) and the NDC Dean, Dr Daria Daniels Skodnik (SVN C). After an office call with the Commandant, General Schissler signed the NDC guest book. He then moved to the Maynard-Thorn hall to follow SC 128âs Study Project presentations. The Study Project (SP) is a core academic activity of the Senior Course (SC), culminating in a presentation to the whole of the SC by each Committee in the final week before graduation. The Committee SP enhances Course Membersâ teamwork, enables them to explore selected NATO issues in detail, and develops their ability to think critically and to produce a constructive analysis with proposals.

In the afternoon, General Schissler addressed SC 128. He highlighted the importance of working on the âtransatlantic bridgeâ in order to address threats comprehensively.

General Schissler was commissioned through Officer Training School and completed undergraduate navigator training in 1981. He served as an instructor, evaluator, chief navigator, executive officer and operations officer. General Schissler was selected for a National Security Fellowship at the John F. Kennedy School of Government, Harvard University. He has held assignments on the Air Staff and Joint Staff, including duty as the assistant executive officer to the Chief of Staff of the Air Force. General Schissler most recently served as the Director, Strategy and Policy, Headquarters U.S. European Command.