On 22nd July, the NATO Defense College celebrated the graduation of Senior Course 128. With 74 high-ranking officers and civilian participants from 31 different countries from across the Atlantic Alliance and partners graduating, this major event was attended by Course Membersâ families as well as the College Flag Officers, Faculty and Staff. 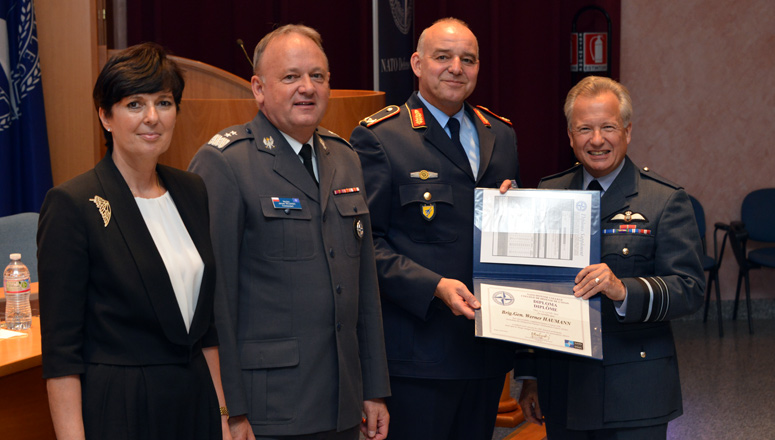 The Senior Course is the NDCâs main academic activity. It takes place twice a year and encompasses several Study Periods, as well as Field Studies to NATO and partner countries. Senior Course 128 took place during an especially important year for the College. As a matter of fact, 2016 marks the 65th anniversary of its foundation and the 50th anniversary of its relocation to Rome. Over the last decades the Senior Course has changed a lot: once, only NATOâs founder members participated; now the SC brings together Course Members from diverse cultural, geographical and professional backgrounds. Over the years the Course has welcomed participants from many different partner countries, which has made this experience interesting and enriching for all involved.

NDC Commandant Major General Janusz Bojarski (POL F) welcomed a distinguished audience of Ambassadors and Military AttachÃ©s, together with Italian civilian and military authorities. During his speech the Commandant congratulated Course Members on having successfully completed five months of intensive and demanding study, including a very full Field Studies programme, during which they visited capitals of many Alliance member states and partner countries. The Commandant underlined the relevance of the insights acquired in discussing regional and world issues with authoritative speakers, from both the academic and professional spheres. Course Members had been challenged to speak about different topics and defend their opinions - not an easy task, but crucial in a multinational environment. The Commandant also spoke about the recent tragic experiences of various Alliance and partner nations.

The guest of honour was the Director General of the NATO International Military Staff, Air Marshal Sir Christopher Harper. His participation was a source of inspiration for Course Members, looking ahead beyond their graduation. Air Marshal Sir Christopher Harper, during his career, has held significant appointments such as Command Group Executive Officer at NATO Headquarters Allied Air Forces Central Europe, and Deputy Commander of NATOâs Allied Joint Force Command at Brunssum in the Netherlands; he was also involved in operations over Iraq and Bosnia.

In his graduation address, Air Marshal Sir Christopher Harper spoke about the importance of team building, dialogue and having different perspectives in order to move forward on the issues concerning international security, and highlighted the NATO Defense Collegeâs contribution to cohesion building. âNATOâs processes may not be dynamicâ, he said, âbut the outcome of discussions held at 28 are the fruit of consensus and thus hold greater weightâ.
The speech was followed by an excellent Q&A session.

Course President BrigGen Werner Haumann (DEU F) and Vice-President Mr Tolle Hoel Stabell (NOR C) together gave a farewell speech, highlighting the uniqueness of the College and the importance of the Course.

To conclude the celebration, Course Members were called individually to receive their diplomas from Air Marshal Sir Christopher Harper, the Commandant of the NDC and the Dean.

As Senior Course 128 bids farewell to the College, the inauguration of SC 129 is scheduled for the beginning of September.