After the first day of celebrations that included a military ceremony and speeches given by the President of Italy and the NATO Secretary General, today the festivities for the 50th and 65th anniversary of the College came to an end. 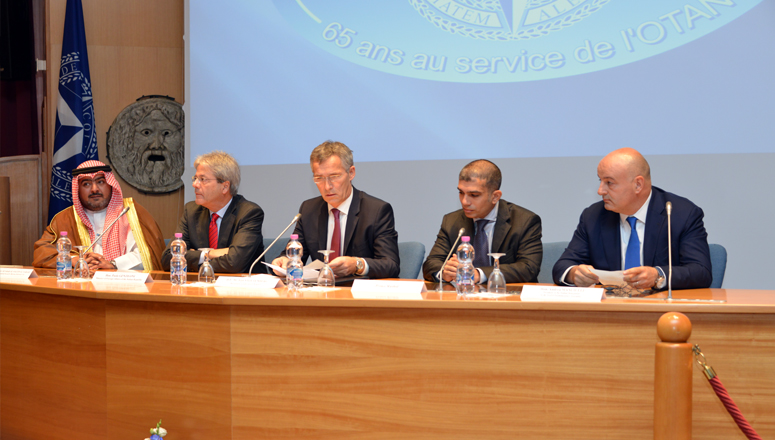 The day started with the arrival of panellists for the morning panel discussion: NATO Secretary General, H.E. Jens Stoltenberg; His Royal Highness Prince Rashid Bin El Hassan of the Hashemite Kingdom of Jordan; the Italian Minister of Foreign Affairs, Mr Paolo Gentiloni; His Excellency Sheikh Thamer Ali Sabah Al-Salem Al-Sabah, President of the National Security Bureau of Kuwait; and the President of the Italian delegation to the NATO Parliamentary Assembly, Mr Andrea Manciulli. They were warmly welcomed by the Commandant of the NATO Defense College, Major General Janusz Bojarski (POL F) and the Dean, BGen (ret.) František Mičánek (CZE).

Over the last few decades there have been significant changes in the types and scale of threat facing the Alliance. NATOâs Southern Flank is as precarious as its Eastern one, making the Allianceâs partnerships with like-minded states in the Middle East and North Africa region (MENA) all the more significant. Hence the overarching theme of the panels: âNATO and its Partnersâ, with a particular focus on the MENA region.

The title of the first day’s panel was: “NATO cooperation with partners in the Mediterranean and Middle East”. In attendance were the North Atlantic Council (NAC); the Chairman of the Military Committee (CMC), Gen Petr Pavel; the Military Committee (MC); and Course Members from Senior Course 129 and the Sixteenth NATO Regional Cooperation Course. A live link was provided for NDC staff to follow proceedings.

Opening remarks were made by the NDC Commandant, who briefly presented the topic. The members of the panel then discussed the importance of enhancing cooperation and partnerships, as well as capacity building in certain countries with a view to improving their effectiveness and autonomy in responding to local crises.

International broadcaster Mr Nik Gowing moderated the panel and the following Q&A session, giving participants the opportunity to participate in a challenging and stimulating exchange of views.

The second panel of the day entitled: “NATO and its Partners: Strengthening ties to address contemporary security challenges” took place later in the morning and was again moderated by Mr Gowing. Panellists were: Gen (ret) J. Allen, Co-Director of the Center for 21st Century Security & Intelligence, Brookings Institution, Washington D.C; Mr J. Appathurai, Deputy Assistant Secretary General for Political Affairs and Security Policy and NATO Secretary General’s Special Representative for the Caucasus and Central Asia; and Prof Abdennour Benantar, Associate Professor (MaÃ®tre de confÃ©rences) at UniversitÃ© Paris 8, France. The expertise and experience of the panellists made for good engagement with the Anciens in the audience, who were able to further appreciate the importance of partnerships for NATO and its strong links with various countries in the MENA region.

This was also an opportunity for NRCC-16 Course Members to focus on the ways and means to strengthen ties within the Mediterranean Dialogue (MD) and Istanbul Cooperation Initiative (ICI) partnership frameworks.