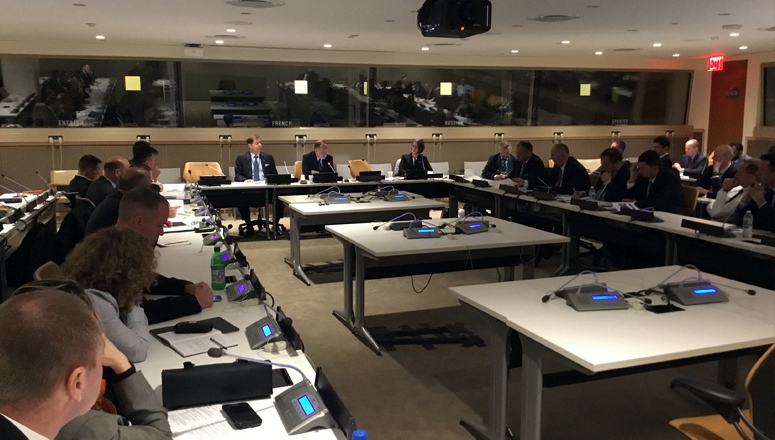 Senior Course 129âs second Field Study commenced with an excellent visit to the United Nations in New York City, in the UN General Assembly building. Course Members received a briefing by Jack Christofides, from South Africa, Director of the Policy, Evaluation and Training Division in the Department of Peacekeeping Operations (DPKO). He explained in his talk the main challenges of UN peacekeeping, starting with the evolution of the instruments of peacekeeping, and used the example of Cyprus. As a second challenge, he described the difficulties of protecting civilians and gave examples of operational experience in South Sudan. He also spoke about sexual abuse and the need for more measures on the UN side. At the end of his speech he underlined the need for the UN, because of misunderstandings, to better explain what UN peacekeeping can - and cannot - do, especially in relation to terrorism. He stated that there is a clear decision of the Security Council not to involve UN blue helmets in counter-terrorism operations; but, as UN troops are targets for terrorism and cooperate with other operations related to the fight against terrorism, there is an obvious need for clarification. He mentioned that one of the biggest challenges was when governmental forces attack UN forces, or governments do not accept a UN presence because of conflicting interests. Following his speech, he answered many questions from Course Members.

A series of informative briefings followed. Major General Adrian Foster, Deputy Military Advisor, spoke of the challenging context within which PKO occur today (16 missions, with 121 countries involved and a general focus on sub-Saharan Africa), with asymmetric threats made all the more relevant by cross-border flows of ideas, weapons, funds, fighters and illicit enrichment trade that exacerbate intra-state conflicts. He stressed the significant changes occurring within the UN HQ in New York, to improve strategic, operational and tactical level PKO activity. With Navy Captain HervÃ© Aufret, he afterwards answered Course Membersâ questions - for example, on the challenges and possibilities of improving NATO-UN relations.

The afternoon was spent at the Council on Foreign Relations, an American think tank which provides an academic-level forum to discuss US foreign policy. Mr Max Boot, Senior Fellow, spoke to the NDC group about US international relations, both currently and in the event of Donald Trump or Hilary Clinton winning the upcoming elections. This critical, somewhat provocative but greatly appreciated political-military level presentation was followed by a question and answer session, with participants taking full advantage.

The participants were very grateful for the high level of the morningâs interventions, as well as for the opportunity to engage in frank and honest discussion with the experts during the ensuing Q&A sessions.