Senior Course 129âs Transatlantic Link Field Study commenced with a very successful visit to the United Nations in New York City, followed by a sombre but professionally rewarding tour of the 9/11 Memorial Museum. 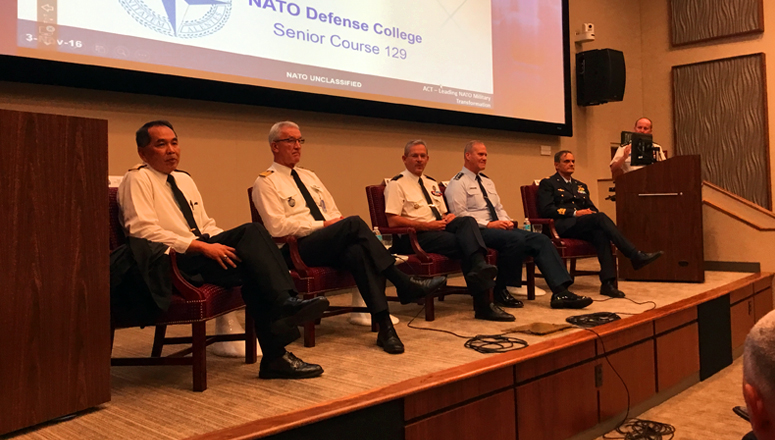 The course then proceeded to Norfolk, Virginia to visit NATO's Supreme Allied Command Transformation (ACT). Before arriving at ACT, Course Members had the opportunity to tour the naval base and visit the aircraft carrier USS George H. W. Bush, which is going to deploy in the North Atlantic in early 2017. This visit continued with a business lunch at the ACT facilities, where the participants were able to meet some of their national representatives and a number of Anciens working at ACT.

At the beginning of the afternoon Supreme Allied Commander Transformation (SACT) General Denis Mercier opened the session with remarks on the importance of the last NATO summits. He stated that, while the tasks of the Alliance as described in the Strategic Concept of 2010 are still the same, what has fundamentally changed is the interactions between them. He underlined that these interactions play a fundamental role in the continuing development and posture of the Alliance â hence the importance of prioritizing resilience, readiness and responsiveness. A key element in this respect is interoperability, which is why exercises are so important.

These initial remarks were followed by three presentations to develop the topics introduced by General Mercier. First, CDR Chris Bennett described in detail what countering hybrid warfare and building resilience mean for the Alliance, looking specifically at the roles of the nations and the Alliance itself: the nations are first targets and responders, while NATO supports, assures and reinforces.

A second presentation, by Col John Dalby, was about the results of the Warsaw Summit from an ACT viewpoint. He explained the consequences for deterrence and defence, as well as in terms of projecting stability.

In the last presentation, Col Sean Killeen spoke about the Allianceâs enhanced exercise programme, with details of âTrident Javelinâ in 2017 and âTrident Junctureâ in 2018 â both involving command post (and computer assisted) simulations with a live exercise component.

This session was a real success. Participants are very grateful to ACT for the opportunity to speak directly to the people who play a central role in the development of the Alliance. The format of the session was well appreciated by Course Members and very well organized by ACT.