The third main stop on SC 129âs Transatlantic Link Field Study was Washington, D.C., on 4th November 2016. The tour began in the Cannon House Building of the House of Representatives, where Mrs Betty K. Koed explained the role of the Senate. As during the first Field Study in Europe, briefings like this afford an opportunity to understand the organization of the political system of Alliance members. As a historian, Mrs Koed explained the origins and evolution of the political legislative structure of the United States in relation to the countryâs federal structure, underlining the role of the majority-minority relationship in the Senate. At the end of her presentation, she answered Course Membersâ questions. 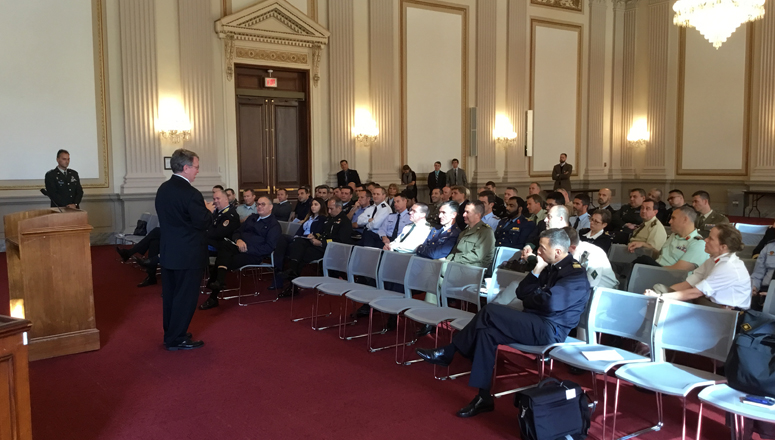 A second briefing was given by Mr John Sandy, Chief of Staff of Senator Jim Risch of Idaho, who explained the role of service offices on Capitol Hill in representing service and Executive Branch defence policy decisions to members of Congress. These Army, Navy, Marine and Air Force offices have the task of securing support from congressional members for the procurement, establishment and policy objectives of their respective services. This is a unique military-political structure and function, without equal in the Alliance, knowledge of which helps provide context to U.S.-NATO relations.

The third briefing was by Mr. John Daly, Assistant to the Director of Marine Corps Office of Legislative Affairs. In this very interactive session, he explained briefly how the financing of the Armed Forces works (in accordance with a system of checks and balances) and how it could be influenced by the results of the elections, after which he took questions from Course Members.

These sessions were well appreciated by Course Members, enabling them to understand how the political-military interface works in the United States.

After a working lunch, SC 129 went to the Pentagon for briefings on US security policy. Opening speaker BG John M. Wood (Deputy Director for Politico-Military Affairs for Europe, NATO and Russia, in the Strategic Plans and Policy Directorate of the Joint Staff) explained the structure and role of the Joint Staff, underlining the role of the different committees in the decision-making process up to National Security Council level.

At the moment, beside the field study, Course Members are working on their individual papers. Briefings like those in Washington are a unique opportunity to ask questions and obtain first-hand information for their research.

This was certainly the case with the briefing of the Deputy Assistant Secretary of Defense for European and NATO Policy, the Honorable James J. Townsend, Jr. The speaker concentrated on the role of his office in bringing military-political perspectives together in U.S. policy-making regarding Europe and NATO. Mr Townsend reiterated that the current challenges faced by NATO, and the U.S. within NATO, are unprecedented. He opined that the U.S. would like to see the Alliance reinvest in Collective Defence, but he underlined several times, both during his talk and in the Q&A, that a great deal of valuable cooperation has laid a sound basis for the future.

After these intensive sessions, the Senior Course was invited by General Robert Neller, Commandant of the Marine Corps and an Ancien of the NDC, to attend a reception at the Marine Corps barracks. While there, some of the participants had the opportunity meet their national representatives to the U.S. (mainly Defence AttachÃ©s).