The final events of the visit to Washington DC for SC 129 involved briefings and question and answer sessions with the Rev. Adam Russell Taylor, Lead for the Faith-Based Initiative in Global Engagement at the World Bank, and Mr Patrick Cirillo, Principal Assistant to the Secretary of the International Monetary Fund. 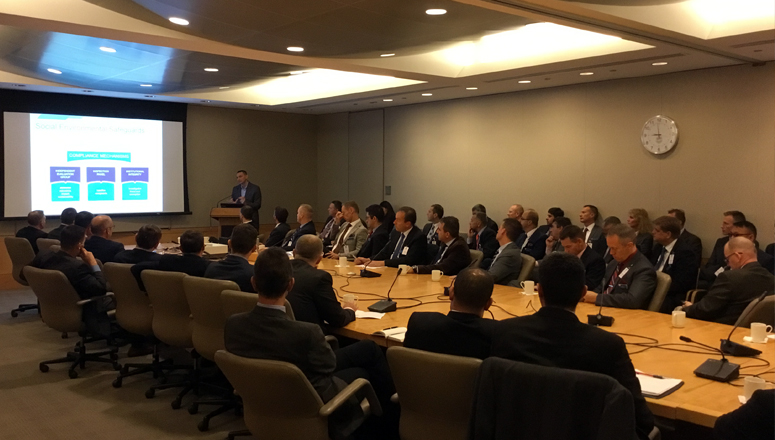 Taking place at the IMF headquarters, the briefings presented the history, role and challenges of World Bank and IMF activities. During the first briefing, the Rev. Russell Taylor gave details about the mechanisms for low income countries to borrow money and issues concerning post-conflict reconstruction. He explained the financial role of the World Bank, in the interaction not only with global and regional organizations but also with private companies. He showed clearly how World Bank initiatives act as a kind of risk insurance for poor countries, and how the WB helps people from these countries to escape poverty. He showed impressive results in the WBâs contribution to reduction of poverty. Among the 17 goals of the organization, he presented its short, middle and long term programmes together with the challenges it will face in the coming years. The presentation was followed by a discussion.

The briefing by Mr Cirillo, on the relationship between economy and security, was the follow-up to a talk he gave to SC 129 some weeks ago in Rome. This time he focused more on the role of the IMF. He noted at the beginning of his speech that NATO and the IMF have many similarities: both organizations were born after WW2 and prioritize development of cooperation for enhancement of security and prosperity. Mr Cirillo explained the different functions of the IMF for countries: assessment of economic policies, technical assistance in strengthening institutional capacity, and financial assistance to support economic reforms. He talked about economic prospects and risks for the coming years, all associated with slow recovery from the financial crisis, weak economic growth and low investments. He especially mentioned some aspects that could have consequences for stability and security, for example the growth and future economic transition of China or the monetary policy divergences among major economies. After his very informative briefing, he answered questions.

These briefings gave Course Members a clear idea of the current and future implications of economic and financial forces affecting the global security environment. The knowledge acquired is of particular value, with a view to integrating economic factors into the strategic analysis of security and development.