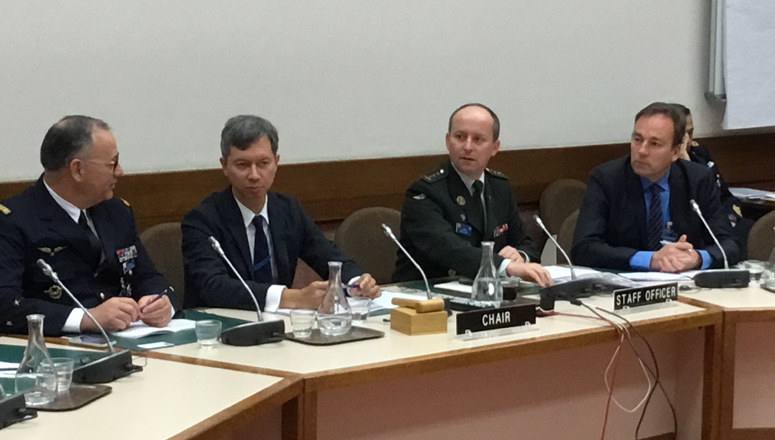 At NATO HQ, for the last time before the Headquarters move to the new building next year, the Senior Course heard briefings from the International Staff. The first briefing was from Dr Juliette Bird from the Counterterrorism Section, who spoke frankly about the security challenges faced by the Alliance after the Warsaw Summit. In a second briefing, Dr Jonathan Hill, from the Operations Division, spoke about the operational challenges of the Alliance from an HQ perspective. He explained what âprojecting stabilityâ means for NATO, focusing on Afghanistan and Irak. He was very positive about Operation âResolute Supportâ in Afghanistan, describing it as very flexible and well adapted to the needs of the Afghan forces. He underlined the importance of maintaining the actual force level of NATO forces over the next years. He also spoke about the need for Afghanistan to maintain relations with other Central Asian countries, especially with Iran and Pakistan.

In a third session, Mr Gabriel Bernier (Defence and Planning Division) spoke about defence policy and addressed the Russian issue. He explained how the decisions taken in Warsaw will allow for the strengthening of defence and deterrence in the Baltic States and in Poland. He also underlined that these decisions are transparent and in accordance with international agreements.

The last session was dedicated to partnerships and their importance. The speaker explained the role of partners, existing partnerships and how they evolved. She underlined the âopen door policyâ and its continuation in the future. She was also very frank about the challenges related to integration and cooperation with partners in the future, consistent with developments in the security environment.

The Q&A sessions which followed clearly showed how Course Members have developed their strategic-level thinking over the last few months.

General Petr Pavel, Chairman of the Military Committee, described the role of the MC, and then discussed the "arc of instability and crises" around Europe. To the East, Russia has chosen to use the military instrument of power to achieve its national interests in ways that NATO failed to anticipate early on, but which are now manifest and in need of strong deterrence and measured responses. Such responses must appreciate that NATO's relations with Russia need to be balanced and open to several forms of engagement. To the South, the challenges caused by the ongoing conflicts in Syria, Irak and Libya, tensions in Israel, Gaza and the Sinai, and the weakness of states and institutions throughout the southern region exacerbate the threats of terrorism and mass migration to NATO countries. The Alliance is committed to working with regional partners and organizations, such as the EU, to contain threats and comprehensively address the root causes of regional instability. At the end of his presentation, General Pavel spoke about the future of NATO and stressed the need for cooperation with other multilateral security organizations.

At SHAPE, SC129 was received by LtGen Delort-Laval, VCOS who welcomed the participants to Mons. In his introduction, he identified SACEURâs priorities: rapid and ready forces, unity in the Alliance, the use of strategic partnerships and the constant need to adapt to an evolving environment.

BG Tak, Director of the Comprehensive Crisis and Operations Management Centre, first talked about the structure, function and role of SHAPE, and then gave an update on the current situation of various Alliance operations, including the air policing operation over the Baltic States, Resolute Support in Afghanistan and KFOR in Kosovo. BG Ford then presented some results from the Warsaw Summit from a SHAPE point of view, including the status of the Readiness Action Plan. In his presentation he gave details on the various components of âDeterrence and Defenceâ, including enhanced and tailored forward presence, the framework for the southern flank and ballistic missile defence. He also referred to nuclear deterrence, cyber defence and spent some time discussing maritime posture. On the topic of âProjecting Stabilityâ, he underlined NATOâs enduring commitment to Afghanistan. In his conclusion, he qualified the European Union as an essential partner, which shares the same values and interests â a good transition, since Senior Course 129 will soon visit the European Military Staff.