For the last stop of Field Study II, SC129 was invited to attend a session on the EU and its External Action Service at the Albert Borschette Conference Centre in Brussels. SC129 was received by RAdm Gluszco, Deputy Director General of the EU Military Staff (EUMS). 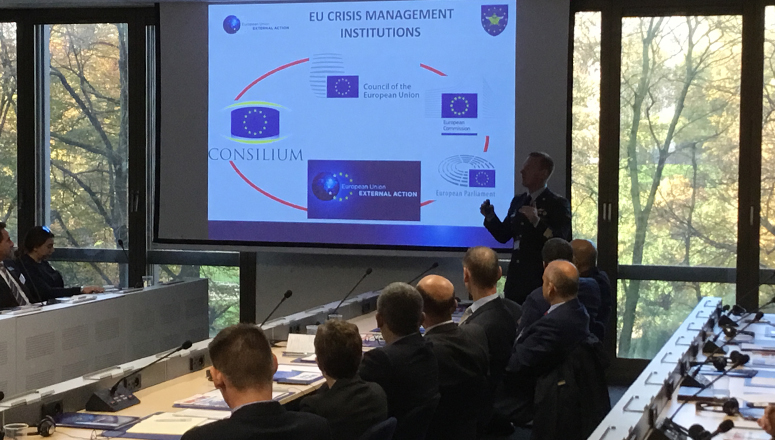 The session, moderated by Capt Gelly (FR N), Faculty Advisor at the NDC, began with a presentation on the role of the military within the EU by Col Bressan, Assistant Chief of Staff (ACOS) for External Relations. He first explained the differences and the roles of the various Institutions related to security and defence in the EU, and described how the decision making process works for Crisis Management. He also explained the policy framework for the European External Action Service (EEAS): the âCommon Security and Defence Policyâ (CSDP) and the strategy to implement it. The strategy, developed in 2016, is based on shared vision and common action of EU members. Col Bressan also explained the meaning of âComprehensive approachâ for the EU: beside CSDP, it includes diplomatic action, takes economic factors into consideration and also involves development activities. In short: most EU institutions are involved in Crisis Management. He then concentrated on the EUMS and explained the structure and capability development process for EU capabilities contributors. He observed that although the objectives of capability development are different in the EU and NATO, both have more or less the same shortfalls. He also mentioned the differences between NATO and the EU and underlined that the two institutions do not compete but are complementary and that NATO-EU cooperation is essential for the security of the European continent. He concluded in saying that the EU and NATO are partners of strategic importance. He then answered the questions from participants.

The second briefing was given by LtC Mari-Mateo from the Operations Division, who described the actual status of EU military missions and operations. In his presentation, he went well beyond a simple description of EU missions, explaining relations with NATO (for example ALTHEA in Bosnia-Herzegovina, which is based on the Berlin+ agreement, allowing NATO assets to be used by the EU), the future of each mission and the challenges related to these missions. This briefing gave a real taste of EU involvement in security. The example of EUTM in Mali is especially significant in the fight against terrorism. In his conclusion, LtC Mari-Mateo underlined the fact that all the missions are correlated to EU regional policies, and therefore really comprehensive in their setup. Interestingly, with regard to regional policies, during the question and answer period, he mentioned cooperation with the Strategic Commands of the US Armed Forces, in particular AFRICOM.

The third and last briefing was given by Mr Versmessen, Chief of Staff and Deputy Civilian Operations Commander. In his introduction, he stressed the two main differences with the military staff: the existence of a permanent command structure and the financing of the civilian missions which rely on the EU budget. He then described the Kosovo and Afghanistan missions and those in Mali and Somalia. Theses missions reveal the intrinsic cooperative nature of civilian missions, the first two missions are made in cooperation with NATO and the other two in cooperation with the EU military component. He then described the broad range of characteristics of the missions: policing (e.g. criminal investigation), judiciary (for example support to prosecutorial bodies), training missions (including training the trainers), monitoring missions, security sector reform etc. The EU makes the difference between executive and non-executive missions: in the first, the police for example is allowed to arrest people, in non-executive missions their role is only advisory. He also mentioned the political dimension of the missions and, like the military, the diplomatic activities related to the missions. In conclusion, he explained the procurement rules and the support to the missions with the new support platform and how missions are planned and implemented. This is very similar to the military CONOPS (Concept of Operations) and OPLAN (Operation Plan). He then answered the questions from participants.

For this last activity before flying back to Rome, SC129 Course Members got a really complete view of EU missions and how these missions interact with other actors. Participants were able to understand the underlying complexity of the different processes from decision making to the implementation of missions, including their support and financing. These briefings were of real added value and much appreciated by participants.