New Research Division Publication - The Determinants of Recent Russian Behaviour: What do these Mean for NATO Decision Makers? 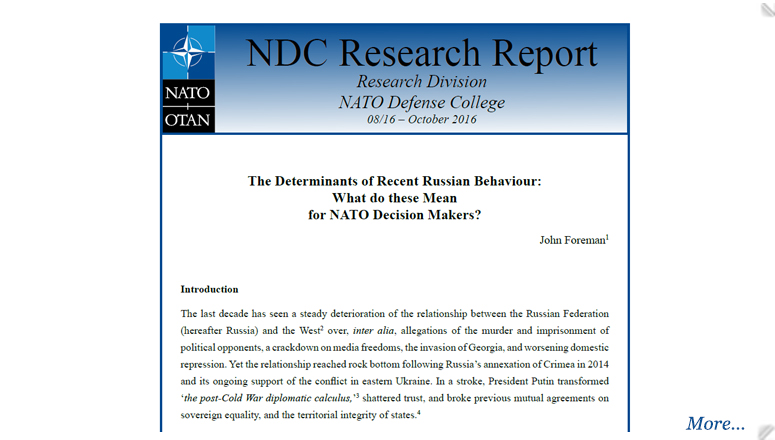 This NDC Research Report by Commander John Foreman of the Royal Navy argues that although specific circumstances differ, Russian long-term behaviour, both domestic and foreign, is broadly consistent. Geography, politics and national identity continue to shape how Russia and its leaders view the world, understand and organize themselves and act. Based on his conclusions about Russian political culture, he believes that the period of strategic confrontation between the West and Russia is likely to be extended, but the Alliance must not panic. Russia lacks the potential, military forces, ideology of the Soviet Union and the capacity to take on a global role. Indeed, overreacting in terms of Cold War rhetoric, attempting to isolate or damage Russia, or stationing large forces forward, will play directly into Russiaâs traditional fear of encroachment. Nor must NATO react in kind. Rather, it must somehow strive to maintain communication channels for a frank dialogue, to de-escalate current tensions and achieve greater predictability in its relationship. In so doing, he says, the West should not personalise the issue by demonizing President Putin. And it must always recognize that there is a risk of miscalculation on both sides, but particularly by Russia. Most importantly and as noted decades ago by George Kennan, there is an acute need for NATO to develop a deeper understanding of Russia, its leadership and its motives, as there âis nothing as dangerous as the unknown.â

We hope you find this report valuable and interesting in your efforts to better understand Russia.