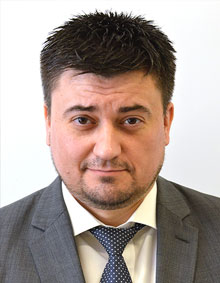 Dumitru Minzarari was a Partnership for Peace Fellow at the NDC between March and July 2020, and a Visiting Scholar in September 2020. Starting October 2020 he is a Research Associate at the SWP, Berlin. He received his PhD in Political Science from the University of Michigan-Ann Arbor, and holds an MA in International Affairs from Columbia University in New York.

His research interests focus on military strategy, modern warfare and conflict technologies, the diffusion of authoritarianism, and Russiaâs foreign and security policies. Dumitru produced several public policy analyses for various national and international customers, addressing issues of post-Soviet conflicts and security, political development in Eastern Europe, and the dynamics of hybrid warfare. He published on the impact of artificial intelligence on future warfare with War on the Rocks, addressed factors affecting Russia's domestic protests in an edited volume with the Central European University Press, and is an occasional contributor to the Jamestown Foundation's Eurasia Daily Monitor.

Previously, he worked as Secretary of State (for defence policy and international cooperation) with the Moldovan Ministry of Defence, held expert and management positions in OSCE field missions in Georgia, Ukraine and Kyrgyzstan, and conducted research with a number of think tanks in Eastern Europe.