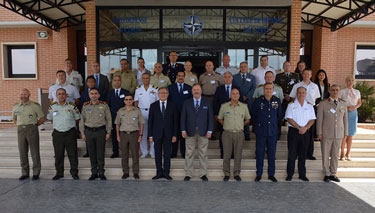 The current 10-week course dedicated to NATO member states and their partners in the Mediterranean and the Gulf (NATO Regional Cooperation Course - NRCC) has proved highly successful. It allows representatives of the countries and organizations in the region* to meet regularly with their counterparts from NATO countries and to enjoy a unique dialogue in a spirit of complete academic freedom. Based on this experience, and mirroring that of the twice-yearly GFOAC (Generals, Flag Officers and Ambassadors ' Course), the Generals, Flag Officers and Ambassadors' Course for Partners, GFOAC-P (formerly known as Senior Executive Regional Conference ,SERC) was launched in September 2012. This one-week Course is addressed to high-level military and civilian officials from NATO and its partner countries across the Middle East-North Africa (MENA) region.

To date, the GFOAC-P has been attended by decision-makers, leaders and influential thinkers, representing the Alliance, its Southern and Regional partnerships (MD and ICI), and other participants among the Allianceâs Global Partners (Afghanistan, Iraq, Kuwait, Qatar, Saudi Arabia).

Experts and prominent speakers address a different topic on each day of the program, covering the major geopolitical changes that are affecting NATO and its partners. Some of the main topics discussed in the GFOAC-P have so far included:

Prominent personalities who have spoken to the GFOAC-P include some of the highest NATO military authorities and Ministers from Partners Countries.

NDC Commandant, Lieutenant General Olivier Rittimann (FRA A), as his predecessors, dwells on the importance of the Course as a major contribution to the College’s cooperation with the Alliance’s partner countries in the Mediterranean and Gulf region. The GFOAC-P offers a forum in the true sense of the term, fostering multilateral perspectives and a lively exchange of ideas on current topics of lasting importance, in a true spirit of academic freedom based on the Chatham House Rule.