This website uses cookies to ensure we can provide you with the best browsing experience.
x
NDC - News- New Research Division Publication: "The War of the Future: A Conceptual Framework and Practical Conclusions Essays on Strategic Thought"

New Research Division Publication: "The War of the Future: A Conceptual Framework and Practical Conclusions Essays on Strategic Thought" 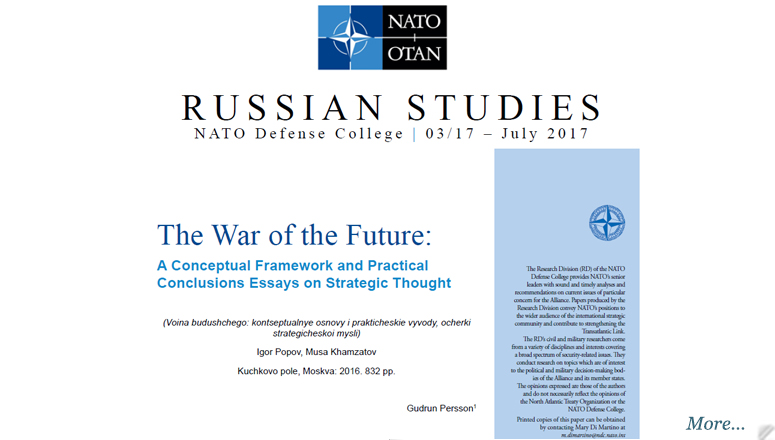 This new essay in the Russian Studies series, Dr. Gudrun Persson of the Swedish Defence Research Agency, FOI, gives a detailed and nuanced review of The War of the Future: a Conceptual Framework and Practical Conclusions. Essays on Strategic Thought. This important new book, written by two prominent Russian commentators on military and security matters - and both themselves former officers - offers important insight into how Russian military thinking is evolving.

The review illuminates the influence of Russian history on today's debates which are rather rich in their understanding of the complexity of today's armed conflicts and how the art and character of war is changing. In so doing, the review offers insight into some of the most pressing questions being discussed in the Russian military and security community - from defining what war is, when and how it starts, and the role of technology. Particularly significant are the reflections on the balance between the offensive and the defensive, the nature of so-called "controlled chaos" and territorial defence.

The book illustrates well the similarities and the gaps in thinking that distinguish Russian military thought from Western, and deserves to be well known in Euro-Atlantic defence and security community.

We hope you enjoy the review.
Regards,
Jeff