This website uses cookies to ensure we can provide you with the best browsing experience.
x
NDC - News- New Research Division Publication -
Trust (in) NATO - The future of intelligence sharing within the Alliance 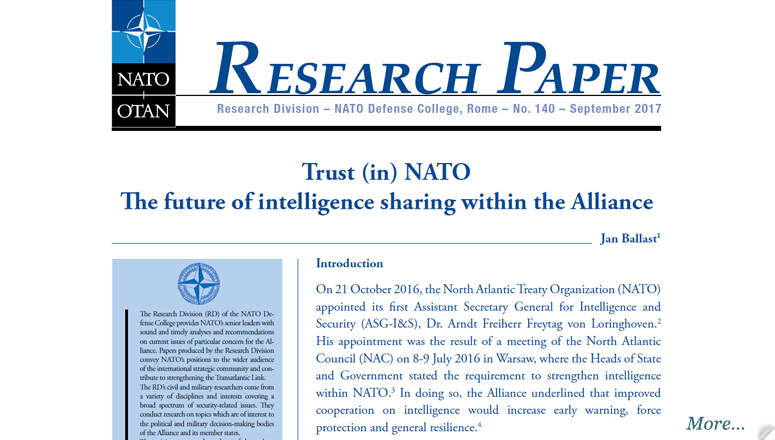 Since its establishment, NATO and Intelligence have been âa contradiction in termsâ, as a CIA researcher coined it in 1984. Different languages, cultures, capabilities and infrastructures proved to be structural constraints. To make things worse, issues like lack of a common threat perception, differing national interests, and political distrust prevented NATOâs national services from sharing with the Alliance as a whole. Recent military missions in North Africa and the Middle East have underlined NATOâs problematic intelligence-sharing apparatus and, besides calls for synchronizing the flow of strategic and operational information, the need for coordinating the many different and inefficient intelligence structures of the Alliance has become apparent.

On 21 October 2016, NATO appointed its first Assistant Secretary General for Intelligence and Security (ASG-I&S). Our latest Research Paper assesses the future of intelligence sharing within the Alliance following the ASG-I&Sâ recent creation of a joint intelligence division. It identifies the more challenging aspects of multinational intelligence cooperation, and discussed the doâs and donâts concerning structure, sharing and content. Based on theory, practice and insider knowledge, nine recommendations are made with the aim of offering a proposal to enhance intelligence as NATOâs first line of defense.

We hope you enjoy this paper that provides a glimpse into bureaucratic politics and Alliance intelligence operations.