New RD Publication: Energy security in the Baltic Region: between markets and politics 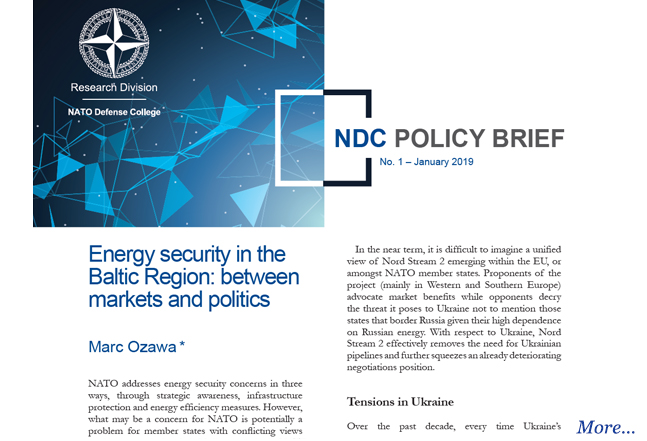 "NATO addresses energy security concerns in three ways, through strategic awareness, infrastructure protection and energy efficiency measures. However, what may be a concern for NATO is potentially a problem for member states with conflicting views on the issue, the politics of which impact their interactions within the Alliance. Nord Stream 2, the trans-Baltic pipeline connecting Ust-Luga (Russia) to Greifswald (Germany), is one such example because it is so divisive".

"This Policy Brief advocates a role for NATO as a constructive partner with the European Union (EU), the governing body for energy security issues in tandem with national governments, while avoiding the divisive politics of direct involvement. NATO and the EU have complementary perspectives on energy security. The Allianceâs view is directed at broad security implications and the EUâs Director- General for Energy (DG Energy) is more focused on market matters. In this complementarity of perspectives NATO could indirectly assist DG Energy in making better energy policies and help to avoid the politicization of projects that create friction within the EU, the type that can spill over into NATO. The strife around Nord Stream 2, for example, works against both EU unity and cohesion within NATO such that, what may not have originally been perceived as a problem for NATO, becomes one".