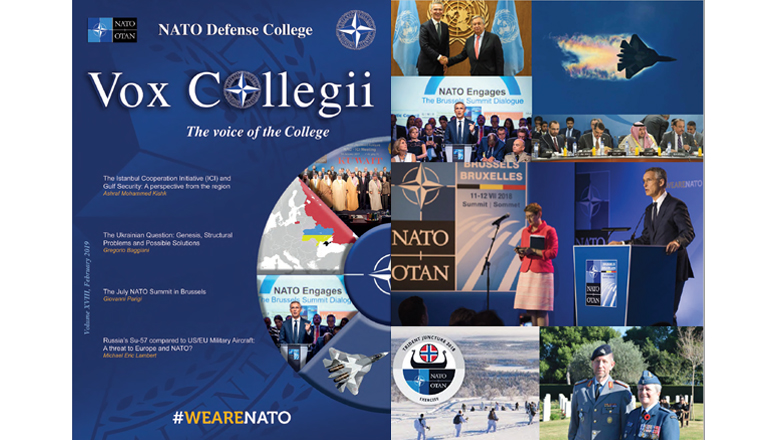 It is with great pleasure that I present you with the latest edition of Vox Collegii, the half-yearly publishing fixture from the NATO Defense College.

During the past six months, we have been running our flagship Senior Course 133, comprising 66 high-level officials from 32 NATO and partner countries from all over the world.

Together with all our other courses and the numerous outreach activities of the College, we have spent yet another intensive academic year, in striving always to fulfill our mission of Education, Research and Outreach.

After nine years of activity, Vox Collegii has reached its eighteenth edition. Year after year, it continues to be a valuable “showcase” for the NDC’s activities, offering significant perspectives on different NATO-related topics, for both internal and external audiences.Â

In the next few pages, you will find four thought-provoking articles.

Dr Ashraf Kishk provides the first contribution on the Istanbul Cooperation Initiative (ICI) and security in the Gulf region. This year will mark the fifteenth anniversary of the launch of this important partnership Â for cooperation in numerous areas with the Gulf States and other partners from the Middle East and North Africa. In this in-depth analysis, the author describes its benefits and how it could improve further.

The second article by Dr Gregorio Baggiani, addresses another area of crucial relevance for NATO, giving some valuable insights into the structural problems and possible solutions to the Ukrainian crisis.

Relations between NATO and Ukraine date back to the early 1990s and have since developed into one of NATO’s important partnerships. In the wake of the Russia-Ukraine conflict Â in 2014, cooperation has intensified and NATO has adopted a firm position in full support of Ukraine’s sovereignty and territorial integrity, within its internationally recognized borders.

Moving on, Dr Giovanni Parigi offers us an assessment of the real outcomes of the NATO Summit held in Brussels last July. Many initiatives were discussed: from the improvement in the Alliance’s deterrence and the enhanced mobility of NATO forces, to the setting up of a Cyberspace Operations Centre and Counter Hybrid Support teams, and the establishment of two new Headquarters.

Last but not least, Dr Eric Lambert shares specific information on Russia’s military air capabilities and how these could threaten NATO and Europe. His policy paper pools together Chinese, US and Russian data to explain the limits of the Russian fifth-generation aircraft Â - the Su-57- when it comes to “ground” applications in three different regions: the post-Soviet space, the Middle-East, and North Korea.

A new year has just begun, and 2019 will mark a significant moment for NATO, as it enters the 7th decade since its creation. We all look forward to the celebrations of the Alliance’s 70th Anniversary, as it remains an essential provider of security for all its citizens and a pillar of stability in a chaotic international system.

The Public Affairs Team hopes you will enjoy the reading and find, once more, some good food for thought.Â