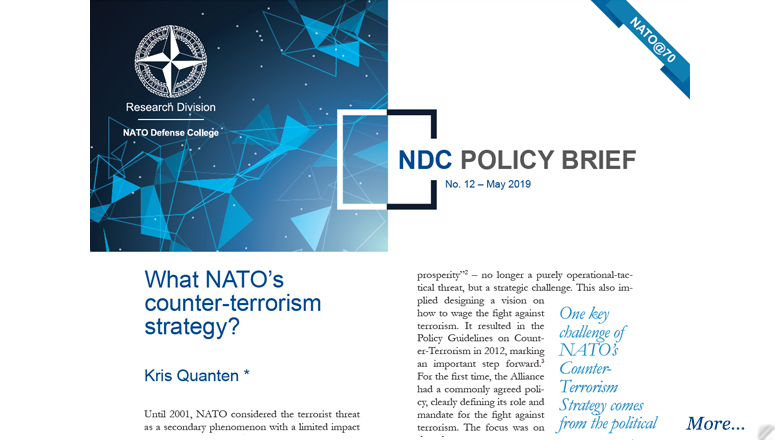 Until 2001, NATO considered the terrorist threat as a secondary phenomenon with a limited impact on the Alliance. The 9/11 attacks marked a radical turnaround: suddenly terrorism became a top security priority. This was also the first and only time in NATO’s history that Article 5 was invoked, furthermore for a terrorist attack.

Initially, the reaction to 9/11 was purely military. However, it soon became clear that there was little strategic vision underlying the initiatives to fight terrorism at the operational level. Hence, the hasty approval, at the NATO Prague Summit in 2002, of a Military Concept for Defence Against Terrorism.1 This Concept foresaw a number of new initiatives, such as intelligence sharing, CBRN measures, the establishment of a Terrorist Threat Intelligence Unit, and Civil Emergency planning, as a priority. Yet all these separate initiatives lacked coordination and an overarching vision.

*(back) Lt.Col. Quanten, PhD, is Military Professor at the Royal Military Academy in Belgium. He was a Course Member in the NDC’s 133th Senior Course, from August 2018 to February 2019. This Policy Brief is a shortened version of his end-of-course Individual Paper.