On Wednesday, 2nd October 2019, after visiting the EU commission and NATO HQ in Brussels, NRCC 22 travelled to London for the second leg of the Field Study. On Thursday morning, NRCC 22 Course Members were received at the Foreign and Commonwealth Office for a series of briefings on the British MoD/Foreign Office joint approach to foreign policy relating to NATO, the EU and the Middle East. 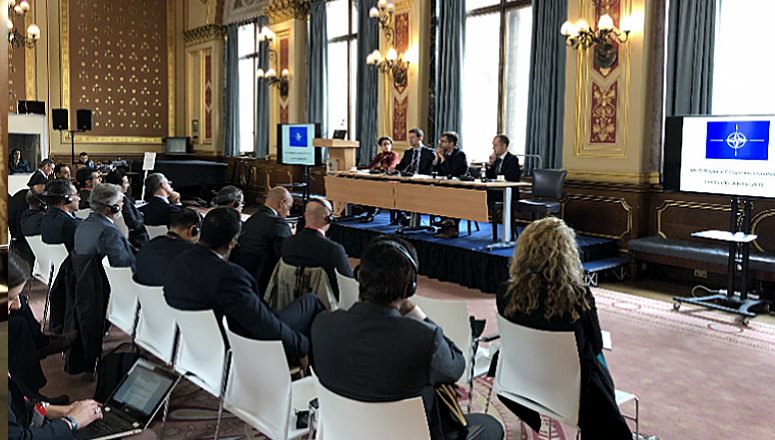 NRCC 22 Course Members were welcomed by Admiral Fraser, Vice-Chief of Staff, who described the MoDâs strategic priorities, emphasizing the United Kingdomâs global approach to defence policy. Highlighting the complexity of the international strategic environment, characterized by growing uncertainty and the emergence of new threats (cyber, Artificial Intelligence, etc.), Admiral Fraser reasserted the importance of the Alliance as the backbone of British defence policy, as well as the British commitment to European security.

There followed a series of briefings on the UKâs national objectives and the strategies and instruments implemented jointly by the British MoD and the Foreign and Commonwealth Office. The Head of the Euro-Atlantic Security Policy Joint Unit (MoD/FCO), Mr Daniel Drake, reviewed the main tenets of the UKâs commitment to NATO, highlighting the contribution of the Alliance to the âGlobal Great Britainâ posture. NRCC 22 participants, then learned about the different facets of British policy in the MENA region from a group of senior MoD analysts.
Mrs Philippa Sharma, Deputy Head of Europe and EU Exit Unit (MoD) and Mrs Joanne Hamer, Head of International and Industrial Capability and Strategy, concluded the series of comprehensive briefings by addressing the domestic implications of Brexit for the British defence industry and for the UKâs capabilities.

The morning at the British FCO ended on a lively and very open discussion between NRCC 22 Course Members and all the speakers, followed by a lunch offered by the British hosts. Course Members, then, had some time to discover and enjoy London, before coming back to Rome on Friday 4th October. This concludes a very positive and interesting Field Study which is a critical complement to the academic programme delivered at the College. Before the end of NRCC 22, Course Members will travel to Joint Force Command Naples to be briefed on the operational level of command, the missions of JFC Naples in the MENA region and the objectives of the NATO Strategic Direction South Hub.