This website uses cookies to ensure we can provide you with the best browsing experience.
x
NDC - News- 10th Anniversary of the NATO Regional Cooperation Course and NRCC-22 Graduation Ceremony

On 8 November 2019, the NATO Defense College celebrated the 10th anniversary of the NATO Regional Cooperation Course (NRCC) and the graduation of NRCC-22. The ceremony was attended by Ambassadors, Defence AttachÃ©s and NRCC-22 family members, as well as the NDC leadership, faculty and staff. 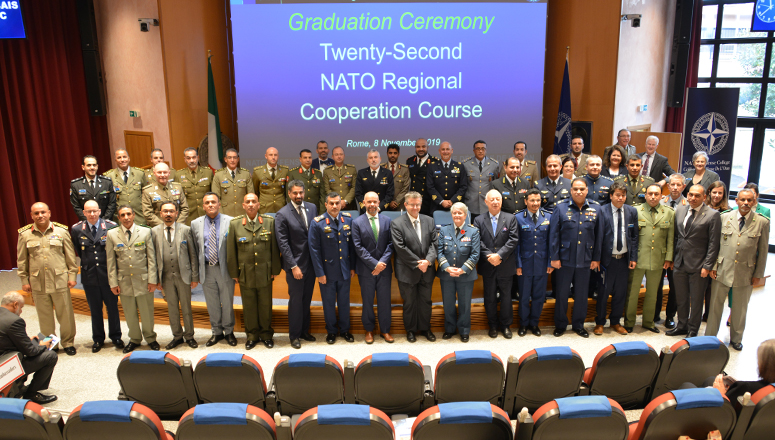 The Course brought together 32 participants from 17 NATO, Mediterranean Dialogue, Istanbul Cooperation Initiative and Global Partner countries. Following the decision taken at the Riga Summit 2006, the first NRCC was held at the NDC in 2009: the objectives were to promote closer dialogue and increased cooperation between NATO and Partners, as well as to develop mutual understanding and professional networking amongst participants.

The 10th anniversary ceremony and NRCC-22 graduation was opened by NDC Commandant LGEN Chris Whitecross, who introduced the panel discussion on âThe Importance of Professional Military Education in Projecting Stability to the MENA Regionâ. The panellists were H.E. Sheikh Fawaz Meshal Al-Sabah from Kuwait, Head of the Information and Security Follow-up Sector and Assistant Deputy Minister of the National Security Bureau; and Dr Pierre Razoux, Research Director for Strategic Studies at the Institute for Strategic Research/Ãcole Militaire (IRSEM) in Paris.

NRCC-22 Course Members and guests were then addressed by the NDC Commandant and by former NATO Deputy Secretary General H.E. Ambassador Alessandro Minuto Rizzo for the closing remarks, who underlined the importance of the NRCC in enhancing cooperation between NATO and MENA nations. Finally the Course President, BGEN Mohamed Almazrouei (UAE) delivered the farewell address on behalf of his fellow Course Members before the conferment of diplomas.

The NRCC has been key to develop a common collective security culture among NATO and partner countries. With more than 630 graduates from 25/27 nations, human interoperability has become reality.