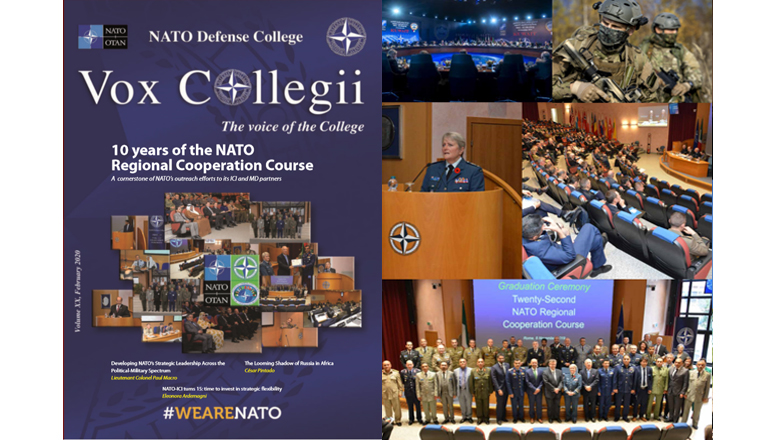 Those of you who like round numbers will certainly share the Vox Collegii editorial team’s pride and pleasure as issue 20 comes off the press. This coincides with another significant milestone for the College: the tenth anniversary of the NATO Regional Cooperation Course (NRCC). But life here at ‘HQ’ has been so busy in recent months that there has been all too little time to take stock of what the past decade has meant for the NRCC, and for the life of the College as reflected in the many events Vox Collegii has covered over the years. As we were going to press, the College had a full complement of Course Members on board: not only were Senior Course 135 and NRCC-22 in session, totalling more than a hundred attendees, but the second semester also proved a particularly busy and rewarding period with a Generals, Flag Officers and Ambassadors’ Course, an Integrated Partner Orientation Course and five Modular Short Courses all following each other in rapid succession.

Turning ten was a significant milestone for the NRCC, fittingly marked late last year by a conference entitled “The Importance of Professional Military Education for Projecting Stability to the MENA Region”.

The conference afforded an excellent opportunity to look at how initiatives like the NRCC contribute to improving and strengthening political-military cooperation with our valued partners in the MENA region, since the very outset when the idea of the Course was first launched at the 2006 Riga Summit of NATO Heads of State and Government.

The article by Dr Chloé Berger, NDC Research and Faculty Adviser in the Academic Planning & Policy Division, gives a detailed account of the Course’s history from its inception: in her analysis, Dr Berger explains the importance of the NRCC in promoting closer dialogue between NATO and partners, as well as in developing mutual understanding and professional contacts among Course Members.

You will also find interviews with some of the people (in most cases part of the team today) who have enabled the Course to take on an increasingly important role over the years: Colonel (ret.) Sandy Guptill, founding Director of the NRCC; Ms Maria Grazia Romano, NRCC Faculty Adviser; Navy Captain Naser Maarafi, who attended NRCC-16 and is now an NRCC Faculty Adviser; and, last but certainly not least, Ms Marie Louise Farah, NRCC Staff Assistant since the very first Course.

Of the three non-NRCC articles in this issue, Lieutenant Colonel Paul Macro’s “Developing NATO’s Strategic Leadership Across the Political-Military Specturm” focuses on the long-term process of developing the Alliance’s future strategic leadership, and the key role played by the NDC. An important contribution to Vox Collegii was provided by Dr Eleonora Ardemagni, who examined the history and future possibilities for NATO-ICI cooperation.

Also of great interest is César Pintado’s “The Looming Shadow of Russia in Africa”, offering an up-to-date appraisal of possible risks related to the increasing presence of Russian security contractors in Africa.

All of us on the Public Affairs Office team trust that you will enjoy what we feel is a truly special edition of Vox Collegii.